Grappling with Drag Race (Part I) 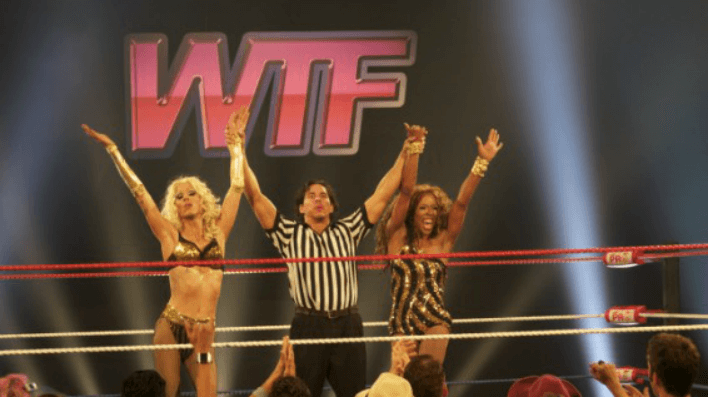 Every Monday night like clockwork, fans tune in droves to see their heroes, larger than life men in elaborate costumes, performing amazing feats and carrying out elaborate storylines. No, for once, we’re not talking about “RuPaul’s Drag Race”, we’re talking about “Monday Night Raw” and the world of professional wrestling. So on first glance, the worlds of “Monday Night Raw” and “RuPaul’s Drag Race” couldn’t seem further apart but if we look a little bit closer, you might be surprised how similar the two are! Let’s start with the fact that, for their respective fans, both “Monday Night Raw” and “RuPaul’s Drag Race” are “can’t miss, appointment television” every Monday night. Both industries are exciting in the ring and on the stage, but the fans know that the REAL drama is taking place backstage, outside of the glare of the spotlight. There are heroes and there are villains, or at least they play that role on the shows, and the archetypes are surprisingly similar. Let’s take a look at some of these Drag Racers and their WWE counterparts!

RuPaul – Vince McMahon: “Don’t cross the boss.” is Mr. McMahon’s personal motto but that could apply just as easily to RuPaul as well. They’re both icons in their respective industries and unquestioned star makers for their genres.

Michelle Visage – Triple H: Michelle is Ru’s BFF and the second in command on Drag Race. Triple H is Mr. McMahon’s son-in-law and arguably the second most powerful man in the company. You don’t want to get on either one of their bad sides, as their criticism can cut you down at the knees. And while they both have enormous chests, if we’re being fair, Michelle is most likely more well endowed downstairs.

Bianca Del Rio – Stone Cold Steve Austin: One of the best talkers in the history of the business, Steve Austin has a t-shirt that says “Arrive. Raise Hell. Leave.” Sound like some one else we know? Yep, that pretty much describes Bianca Del Rio to a tee!

Willam – The Miz: Unlike a lot of people on this list, both of them had fame on TV prior to Drag Race/Wrestling; William playing, among other roles, every dead tranny hooker on numerous procedural dramas, the Miz on Mtv’s “The Real World”. They’re also both dangerous, unpredictable and quite often spectacular with a microphone in their hands.

Laganja Estranja – RVD: RVD’s personal motto is “Nobody get’s higher than Rob Van Dam!” I have a feeling these two would be great friends, especially around 4:20 in the afternoon. Plus they’re both flexible like Gumby, which I would guess makes them very popular.

Phi Phi O’Hara – Randy Orton: A babyface is only as good as the heel (“bad guy”) they face and both Phi Phi O’Hara and Randy Orton are two of the best in the business at playing the villainous foil. Whether being the nemesis to Sharon Needles or the perennial rival of John Cena, there are very few better than these two at being bad!

Carmen Carrera – Ryback: Michelle Visage has chastised queens for “relying on that body” time and time again but Carmen and Ryback just go to show how far body can take you, albeit on completely opposite ends of the spectrum!

Pandora Boxx – Chris Jericho: Perhaps two of the most under-appreciated  superstars in their respective business, Pandora Boxx and “Y2J” Chris Jericho are both amazing on the microphone, using their charisma and humor to attract vocal and loyal fan bases. In addition, many people have felt that they were, shall we say, shortchanged by the powers-that-be on their drive to the top.

Santino Rice – Michael Cole: As one of the judges on Drag Race and as the head announcer on WWE TV, both men are more than competent at their jobs. Good luck finding someone that is a big fan of other one of them though.