Beyond the Face: Royalty Edition with Diana Dzhaketov 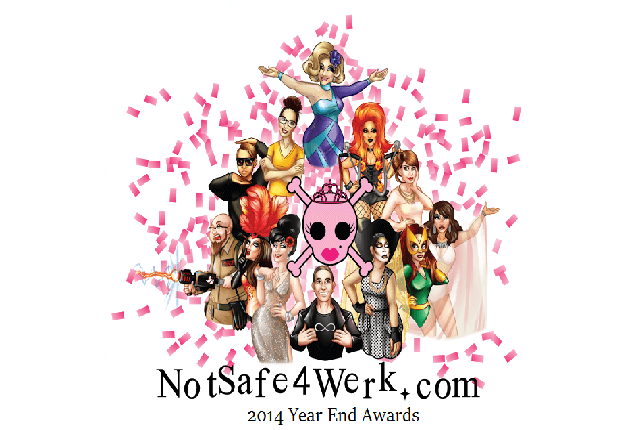 Voiceover begins: “Good evening ladies and gentlemen and welcome to the NotSafe4Werk.com 2014 Year End Awards, sponsored by ShopNS4W.com and Chik-Fil…..what? They pulled out? Oh. Well that’s awkward. Okay then, well please give a warm welcome to our co-hostesses……Chiffon Dior and Poppy Fields!”

*Poppy walks out looking immaculately put together as always. Chiffon looks like one of Lena Dunham’s stylists helped her get ready….after a two day bender.*

CD: So my dear older sister, what do we call these awards…..The Safeys? The Werkys?

PF: The Poppys have a nice ring to them!

CD: Dammit Sidney, we warned you!

PF: And there’s no way you could be Ryan Seacrest! You’re OUT of the closet.

SS: Okay, okay, okay! I’m Sidney Stokes and I’m so excited to be here tonight. I’m thrilled to be able to announce the winners of some of the Awards given out earlier this evening. Ladies, if we can roll the footage?

Video Game of the Year: The Last of Us

Burger Joint of the Year: The Counter

Disney Moment of the Year: The Success of Frozen

Reality TV Moment of the Year: America’s Next Top Model

LGBT Moment of the Year: Spread of Marriage Equality

Drag Anthem of the Year: Let It Go by Idina Menzel

Comic Book Movie of the Year: Guardians of the Galaxy

Best Dressed Woman of the Year: *Tie*Cate Blanchett and Beyonce

CD: Condragulations to all the winners and….Poppy, leave Matt Bomer alone and get back up on stage!

PF: Sorry, sorry, sorry! I was just telling him how much I enjoyed him in “Magic Mike.”

CD: Next up, our friend Lady Stephanie Marie will reveal the winner of the NS4W 2014 Comic Book Moment of the Year Award!

PF: Thanks Lady Stephanie! Love the Captain Marvel costume! I mean, she’s no Wonder Woman, but still. Next up is the so-called “Lost Award”, the NS4W 2014 Tweeter of the Year Award! Angelina Jolie was scheduled to present this award but the poor dear came down with the “chicken pox” so I’m going to step in for her. The winner of the Poppy is……

CD: Next up is the NS4W 2014 LGBT Personality of the Year Award, presented by the one and only Pandora Boxx….who apparently didn’t get the dress code memo.

PF: Congratulations Laverne! We here at NotSafe4Werk.com all love you!

CD: Absolutely! So moving on, my friend Britteny from NYC Stilts is here to present the award for the NS4W 2014 Queen of New York City Award, sponsored, ironically enough, by NYC Stilts. Funny how that works. Take it away Britt!

CD: Poppy! Wake up! It was only her cat!

PF: Don’t DO that to me! You know about my severe pussy allergy!

CD: Um….yeah. Congratulations go out to Bob the Drag Queen! Now, moving over to the west coast, our own Tatiana Turan and some of her Bling Divas are here to present the award for the NS4W 2014 Queen of Los Angeles winner!

PF: Congratulations Melissa and thanks to Tatiana and the Bling Divas! I think the butt drum roll should be a staple of award shows from here on out.

CD: I’d make a comment about you and butt drum rolls but this is a family show. Shall we take a trip to the Great White Way now my dear?

PF: Yes! Let’s! It’s time for the NS4W 2014 Broadway Show of the Year, sponsored by our friends at the Green Room at New World Stages! Our friend Chelsea Piers is here to spill the tea on who the winner is. Take it away Chelsea!

CD: Congrats to everyone at Hedwig on their decisive win and thank you Chelsea for presenting the award! Next up is the NS4W 2014 Drag Look of the Year Award, sponsored by our friends at Corset Connection but unfortunately our presenters couldn’t be here. Poppy, do you know what happened?

PF: I do! James Franco and Seth Rogen were going to be here but they were…..do I seriously have to read this crappy North Korea joke? I’m not doing it. Not happening. I have standards!

PF: Zip it! The winner of the NS4W 2014 Drag Look of the Year is……Phi Phi O’hara for her amazing Halloween looks! Fabulous gurl!

CD: Yasss! Phi Phi clearly won Halloween this year! And speaking of Halloween….I have no segue for that. Crap. Well, the next category is the NS4W 2014 Drag Queen Song of the Year and we have two beautiful presenters, the fabulous Deven Green and drummer extraordinaire, Veronica Bellino! Hello there ladies!

PF: Congratulations Pandora on a fabulous song! Now I’m going to need your help with this next category Chiffon. It’s the NS4W 2014 Drag Queen Makeup Company of the Year Award. Now I only wear a little mascara and a dab of lip gloss but I know you’re one to slather the makeup up on.

CD: True. I guess that spackle you use can’t be considered makeup, at least not legally. ANYWAY! Our friend, the incredibly delight Sutton Lee Seymour is here to reveal the winner and knowing her probably do a little impromptu soft shoe number too.

PF: Congratulations to everyone at OCC! Feel free send some samples my way!

CD: Shameless. Just shameless. Thank you Sutton for the reveal of the award! Anyway, the next award is the NS4W 2014 Album of the Year award! Now originally Tom Bosley of Happy Days fame was supposed to present this award but it turns out he died in 2010 so that left us in a bit of a lurch. But have no fear, we have a great replacement for Tom. You know him, you love him. It’s our buddy and resident Ghostbuster, the Crunk Panda! Thanks for stepping in on short notice Panda!

CD: Um….thanks Panda and congrats Ts! Next up is the Drag Moment of the Year! Our friend Krysta Youngs is here to announce the winner. Welcome Krysta!

PF: Congratulations to Michelle, Courtney, Bianca and everyone involved in the Rocky Horror Picture Show! Well, my dear sister, we have reached our final award it seems.

CD: That’s right, our biggest award of the year, Biggest Achievement in the Field of Microbiology. Let’s take a look at the nominees!

PF: Oh dear, it looks like someone is starting the afterparty a little early. Actually it is the NS4W 2014 Drag Queen of the Year Award! Now just a warning about this one. We’ve given our friend Deven Green complete creative control with this announcement. Let’s see what she came up with, shall we?

CD: Why is the room starting the spin?

PF: Oh dear, you would think with all that extra body weight, she could hold her liquor. Take it away Deven. Please.

PF: Well that was a well-deserved honor! Congratulation Bianca on a great year! Well Chiffon, I think we’ve reached the end of our telecast and the end of our first calendar year here at NotSafe4Werk.com. Personally I want to thank everyone who voted and everyone who has supported us thus far. Do you have anything else to add my dear?

CD: Goodnight everybody and remember to have your drag queen neutered or spayed! See you next year for the 2014 Poppy Awards! Wait a minute….

Last week, RuPaul’s Drag Race took a break from the competition to give us a behind-the-scenes look at shooting a reality competition show during...

Another day, another pandemic red-carpet! After everything we have been through during this past year, I am just grateful that we even got to...