Penny For Your Thoughts: Fresh Hell 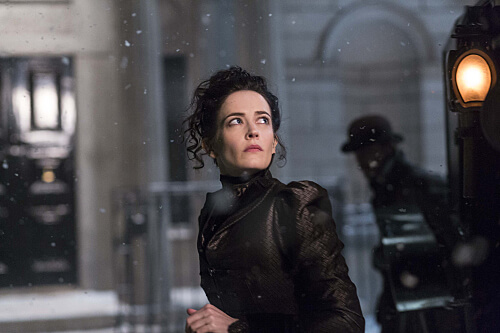 I’m back and so is Penny Dreadful! Welcome to “Penny For Your Thoughts”, the weekly recap column for Penny Dreadful, my favorite show! Penny Dreadful is a wicked combination of Victorian literature, monsters, gore, nudity, and best of all, my favorite actress, Eva Green. This is the second season and we are in for a ride! Witches, a new Frankenstein monster, the devil and a werewolf are just a few of the crazy things we will be tackling this season. If you haven’t seen season 1, go do whatever you have to do to binge what it and come back here, if you have seen it…then let’s do it!

The show opened with Vanessa Ives (like it should) walking in a snowy path. For a moment it felt rather peaceful. But then in the corner, you could see Evelyn Poole. Evelyn is a leader of some sort of witch cult as we come to find out later. Vanessa is then being forced down by some sort of deity or magic that is conjured by Evelyn… already we can tell this season is going to be good.

Mr.Chandler wakes up where we left him in the previous season. It is obvious that Mr.Chandler was rather hungry as a werewolf because the bodies in this bar were MESSED up.

Mr.Chandler meets up with Vanessa in a carriage where Ethan mentions that he is leaving London because he is afraid that his wolf alter ego might make a mess of his friends. The conversation is then cut short when the carriage is attacked by a bunch of pale naked women with sharp teeth and markings. They are obviously after Vanessa  so Vanessa and Ethan fight them off and survive. Unfortunately the horse and the driver did not… Vanessa gets home with Ethan and she is obviously shaken after one of the creatures spoke the backwards tongue of the devil. Then the creatures ran off and transformed into normal women in cloaks.

Dr. Frankenstein is preparing to create the new monster with the corpse of Brona as apart of The Creature’s sick fantasy of having a immortal bride. After The Creature gets home from a awkward job interview, the doctor is able to use the electricity of a storm to give Brona the spark she needs and comes to life. So great…yes Brona is smoking hot and I am glad that she is not leaving the show. But it is going to be quite a problem when Ethan see’s The Creature making out with Brona… You heard it here first.

Vanessa is scared and returns to her room to pray and smear her blood all over the floor in the shape of a scorpion. At the same time Evelyn is discussing with her coven of witches about how Vanessa is the target of their master. We come to find out that the master is indeed, The Devil…

So this season is aiming to be an amazing season. Things are going to go down. The Devil is literally inspiring witches to kill Vanessa. Frankenstein created another monster which will not work out well if Ethan finds out. Ethan is hiding from himself and afraid of killing more as a werewolf.  Sir Malcom and his wife have been in a better place, and Dorian Grey is…. Well he wasn’t here this week. Probably to busy staring at himself in a portrait.

Well everyone, this wraps up the first edition of “Penny For Your Thoughts”. I am so excited this show is back and I am even more excited to share my joy with you all in watching this show. Enjoy your week dreadfuls!

Hello WERRRK.com and welcome back for another great edition of “The Haute Seat”. For this month’s guest, I have with me a two time...