Penny For Your Thoughts: Verbis Diablo 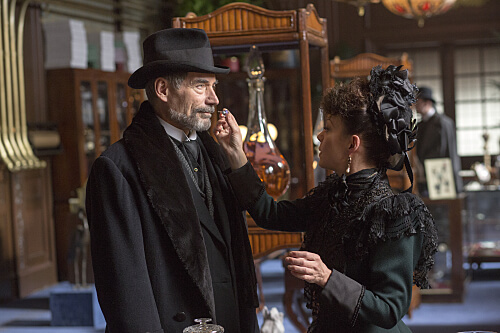 Hello all you Dreadful Fans! Better late than never, Mother’s Day is such an event right? Episode 2 is here and I am ready to break this thing down!  We saw everything from creepy Frankenstein activity, devilish tongue, and of course no episode would be complete without Dorian Grey returning to the show by hooking up with a trans prostitute!

This episode wasn’t the best of Penny Dreadful episodes. But that is to be expected since the second episode of any series is usually overshadowed by the premiere.

So Vanessa is still loosing her cool ever since she got attacked by the three naked witches. I can’t really blame her. But Vanessa, get it together. You are the glue that holds this show together and if you can’t calm down, I can’t calm down.

Back at the Frankenstein lab, Brona is alive and doing rather well….too well… I mean she basically knows more English than I do at this point. She looks good, no scars, and it seems like she is almost gaining back her memory. This is definitely going to pose a problem in the future considering Ethan Chandler is still in London. It’s not going to be cute when Ethan see’s her because she is supposed to be dead… and they are kind of boyfriend and girlfriend…and she was brought back to please the Frankenstein monster. What a awkward love triangle this is. The room is spinning.

Meanwhile Vanessa is getting her charity on in the crappy part of town and gives soup to the poor. Well how delightful. Great the Frankenstein monster is there so of course we were in for a long, never ending poetic conversation that none of us will remember… I already forgot what we are talking about.

Witches are running amok, killing random people and stealing babies… SO there is that happy thought to keep you going today. Be thankful you don’t live in Victorian London.

Some officers went to a hospital to check on the survivor of Ethan’s wolf activity. Apparently he doesn’t have much of a face left….anyways…

Then of course we have our dear Dorian Gray return to the show. Oh Dorian…. Dorian Dorian Dorian… Whenever he is on screen he is either looking at himself, thinking about sex, looking for sex, or having sex. This episode Dorian ends up chatting with this women who ends up being transgender. Long story short, Dorian ends up at a brothel with her and we get full front description of what it means to be transgender. Until next time Dorian.

Mr. Lyle arrived to help our crew figure out what the heck is going on in London. Basically he didn’t really help us make sense of anything. Fast forward to the end of the episode he is at Evelyn Poole’s home after she had been around town stalking Sir Malcom… One of Evelyn’s witches came in with the baby. Evelyn threatened Lyle about some graphic pictures she has of him and then took the baby and went down stairs. Next thing you know she is pulling the heart out of the baby and put them in a large doll that looked like Vanessa. So now Evelyn has a voodoo doll. Great

Next week our old friend Patti Lupone is coming to Penny Dreadful. She was being harassed by witches on American Horror Story Coven, now she is a witch on Penny Dreadful so that is something to look forward too. Stay safe this week and no witchcraft that involves babies!

A Haute Second with Spencer: The 2016 Golden Globes

Did somebody say…. award season? The Golden Globes are here! How exciting!? It’s that time of the year again when we all gather around...

Penny For Your Thoughts: Season Finale

Well my friends, we have reached the end of our journey through this season of Penny Dreadful. I find it so amusing to think...

Penny For Your Thoughts: And Hell Itself My Only Foe

Only one more week people! As the great George Washington once said, “s*** is hitting the fan”! People are losing their minds and fighting...

Penny For Your Thoughts: Memento Mori

Hey all you Witches and Warlocks… this weeks episode of Penny Dreadful was straight up crazy! The show has been a little slow lately...