Penny For Your Thoughts: And Hell Itself My Only Foe 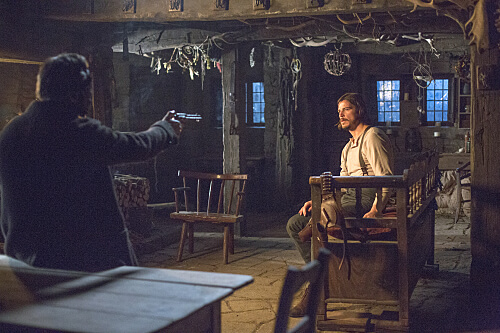 Only one more week people! As the great George Washington once said, “s*** is hitting the fan”! People are losing their minds and fighting each other as tensions are at an all time high! Lets talk about it!

In the first five minutes, Xanax prescriptions need to be pulled out. The man with the tore up face, a la Ethan Chandler, is here in Vanessa’s shanty house, and he is PISSED. He comes and tells Vanessa and Ethan that he basically is going to kill them and rape one or both of them.  Next thing you know Vanessa is being punched in the face, Ethan has a knife being pulled out of his shoulder, and then Vanessa is stabbing this man in the chest repeatedly while Ethan kicks him in the face over and over again. Well…. episode… you have my attention. Frankenstein then shows up and says Sir Malcolm is in trouble. The team then assembles at Malcolm’s  home but they then decided they will go save Malcolm the next day… Vanessa being stubborn… goes anyways when no one is around.

The Frankenstein monster is at the exhibit he works at. He goes into a backroom with the daughter and she locks him in a cell? The whole family comes in and tells him that he is going to be a new exhibit as a freak…. Great. Well if it was anyone else I would care but its not… So good luck Bro! You could stay there for all I care. The Frankenstein Monster is literally the Theon Greyjoy of Penny Dreadful.

Lilly is hanging out with Dorian Gray. After some rough housing on the floor, Lilly is demanding secrets out of Dorian which leads to Lilly transforming into Mike Tyson and bit Dorian’s ear off. What the hell is happening here. Dorian then goes into his portrait room and comes out and its healed. How cute.

At Evelyn’s castle, things are not going well… Sir Malcolm is basically a potato at this point as he lays on the floor terrified. Vanessa arrives first and she meets Evelyn. They have a awkward chat about Malcolm and the devil. Regular type conversations. Vanessa goes down stairs with Evelyn to the doll dungeon. Luckily for all of those that wanted to sleep tonight, the doll came alive and started talking. Don’t pee your pants like I did. Ethan and Sembene get locked in a small corridor. Of course things have to get worse so it’s a full moon. Ethan tries to kill himself but Sembene stopped him out of kindness. Ethan then turns into a werewolf and kills Sembene…. Whyyyyyyyy!!!! Frankenstein finds Sir Malcolm in his craziness but he ends up falling into the same craziness as he starts envisioning all of his creatures. Malcolm might as well walk up with a top hat and a major hat and say “Hey, Welcome to Crazy Town!”

This episode was a lot of cliff hangers but I am sure next week is going to be an episode to never forget. I hope to see you all here next week so we can cry and freak out together. Season finale baby!!!! What will happen next week? Will Ethan save enough human carcass for the rest of us? Will Vanessa get out without being possessed. Will Dorian finally lose his virginity? We will find out next week!

In this article:penny dreadful, penny for your thoughts, spencer, spencer williams

Hello WERRRK.com and welcome back for another great edition of “The Haute Seat”. For this month’s guest, I have with me a two time...