What the Walking Dead: The Well 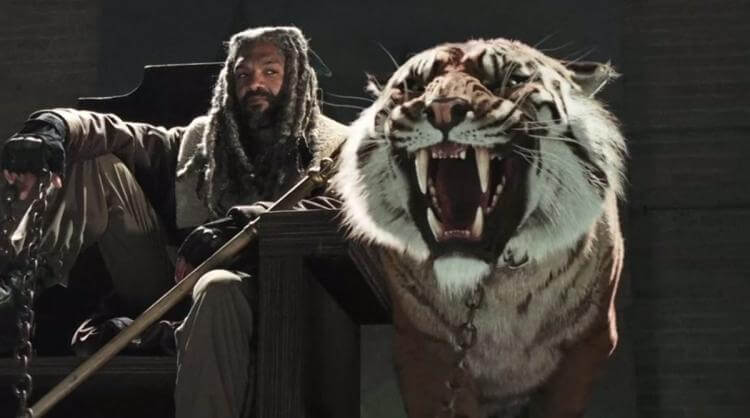 Hey friends we are back! I know, I say that every week. But after the season premiere, it truly is a miracle we could all gather around the television again. This week’s episode was crazy. I mean that in every sense of the word.  Bonkers if you ask me. Sit down with a helping of lunch cobbler and let’s talk about it.

Carol is alive. That is such an amazing thing. As long as Carol is alive, I can continue to watch this show. Okay so, this episode took place right where we left off last season. Carol was saved by these knights who rolled her over to this place called “The Kingdom”. After Carol kind of heals up she is wheeled over to meet King Ezekiel and his pet tiger, Shiva. Let’s not forget the steward, Jerry. This place is absolutely nuts. But I can’t help but love Ezekiel’s fake accent and the fact that he has a tiger. What is going on? Honestly, if I was in the zombie apocalypse… I would probably be pretending I’m royalty somewhere as well. I kind of loved this episode I am just interested to see where this all goes.

Why is Carol trying to leave still? Did she not watch last week’s episode? She needs to get her life together quick. I sometimes just want to shake her! Also, what a waste of bacon! I’m mad that The Kingdom has to give Negan all of that bacon! Other than that, I don’t see many negatives in this episode. Yes, these new characters are very cartoonish. But as Lennie James said on “The Talking Dead”, many leaders in this show are putting on a show. Negan puts on a show, so does Rick, The Governor, and now King Ezekiel. I’m here for it.

The winner this week is obvious. Who better to win the Episode MVP prize than Jerry! His puns are fire and we need that around here. Great job Jerry! Honestly, The Kingdom doesn’t even feel real. One day we are watching Glenn get his brains smashed out in front of his pregnant wife, the next we are in Kings Landing with a king and his pet tiger, with a steward named Jerry. What is going on. Stay woke Jerry.

Well everyone, this episode was a walk in the park as compared to last week. Unfortunately, next week we get to watch Daryl get kicked around by Negan’s people so… Try and get some rest, you will need it. Until then always remember to eat your Frosted Flakes and bacon… See what I did there? Heh…. Have a Happy Halloween! Stay safe and don’t take candy from strangers. Especially Sidney, Poppy, or Chiffon…