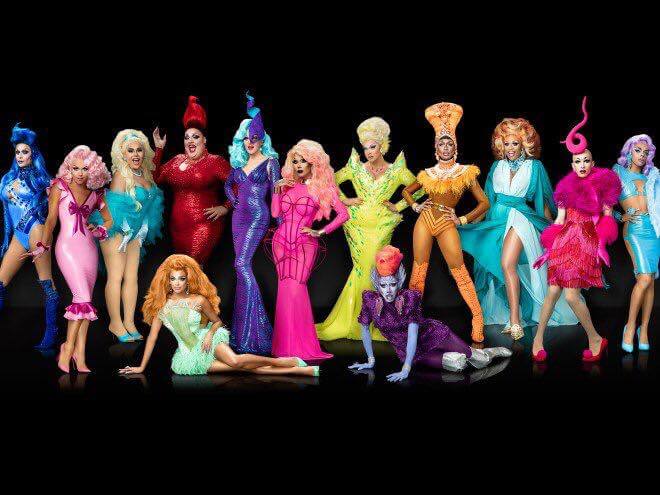 Welcome back to another edition of #THEWEEKINDRAG!

First in the news this week, the Olympics of drag are back! The cast for Season 9 of RuPaul’s Drag Race were finally announced this past week sending the community into hysteria! The promotion video was an explosion of glamour and colour, literally. Each of the 13 new RuGirl’s burst onto screens in a pop of colour and we are SO excited to see what this season holds. Season 9 is definitely a season for firsts. We have Peppermint, the first transgender drag queen to be out and on the show. There have been trans women on previous seasons, however they all came out either during or after filming the show. This is an incredibly important for Drag Race, as it takes another step closer to inclusion for all genders when concerning drag. Another first for this season is bi-coastal queen, Charlie Hides. Born in the US, but living in the UK, Charlie can be considered as the shows first UK queen to be in the cast. Residing in the UK myself, a UK version of Drag Race is eagerly anticipated. Could this be a hint at what’s to come? The rest of the cast this season is star studded, including Aja, Kimora Blac, Farrah Moan, Shea Coulee, Sasha Velour, Eureka, Trinity Taylor, Jaymes Mansfield, Nina Bonina Brown, Valentina and Alexis Michelle. May the best woman, win!

Drag legend Peaches Christ is back this March with “LEGALLY BLACK“, this time teaming up with Season 8 winner and New York treasure, Bob The Drag Queen.  The show will also star Peaches herself, as well as Mahlae Balenciaga, Tim Wagner, Peggy L’eggs and April Kidwell as Anna Nicole Smith. Tickets are available here.

More political rallies took place this past week against Trump’s political agenda. One of these included a protest outside of New York’s Stonewall Inn. The Stonewall Inn is crucial to LGBTQAI+ and drag history, as this is where the Stonewall Riots in 1969 took place.

Meanwhile, over at the Bravo network, longtime drag supporter Andy Cohen surprised Real Housewives Lisa Rinna and Eileen Davidson with drag version of themselves and fellow Housewife, Lisa Vanderpump! New York City drag stars Chelsea Piers, complete with a real Emmy, portrayed, Eileen and Marti Gould Cummings, who memorably performed felatio on a stuffed goose (Don’t ask), who portrayed Vanderpump. But it was Jackie Cox who stole the show with her illusion of Lisa Rinna as she made the Housewife howl with laughter as she came out with a entire rack of her Home Shopping Network cardigans and flashed the audience with a shot of her Depends undergarments. Check out the full “Real Queens of Beverly Hills Drag Contest here!

And last but certainly not least, Lady Gaga’s long awaited Super Bowl 2017 halftime show took place last night. She opened the 13 minute spectacular with “This Land Is Your Land” before jumping off of the roof of the stadium in arguably one of the most iconic moments in musical performance history. Her performance was jam packed with all her hits, including “Poker Face”, “Just Dance”, “Telephone”, “Million Reasons” and “Bad Romance”. Most importantly she included “Born This Way”, with it’s lyrics including “No matter gay, straight, or bi, lesbian, transgendered life… No matter black, white or beige, chola or orient made, I’m on the right track baby, I was born to be brave”. There was something particularly special about her belting out these lyrics given the circumstances of Trump’s America, with Mike Pence sat in the stadium watching her.

Looping drag into this performance, UK’s own Muglar Woman, Alexis Stone has ALREADY created the first ever makeup tutorial of Gaga’s Super Bowl look!  Check out her video below!

We’re excited that our friend Pandora Boxx’s podcast, appropriately titled “The Pandora Boxx Show”, is returning to UBN Radio today for its 2017 debut at 5pm PST! Pandora is going to be joined by her guests former Drag Race star Jasmine Masters and LA Comedian Aidan Park! Head over to UBNRadio.com for more info or to listen!

In this episode the dolls talk about Tamisha Iman’s plan to spill the tea on the Race once her contract is over, Biden’s first...

In this episode the Dolls talk about Cardi B. and Candace Owens‘ latest twitter feud, how Trump’s racist rhetoric led to the rise in...