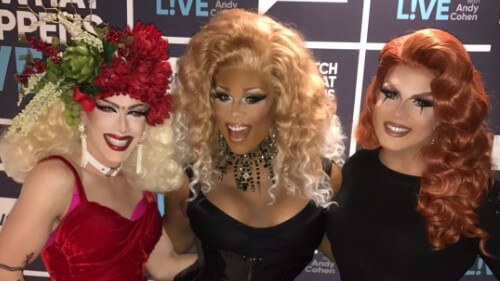 Welcome back to another edition of #THEWEEKINDRAG!

Bad news this week for hit YouTube show, Hey Qween. YouTube’s “Restricted Mode” has been under fire these past few weeks, and for good reason. I wrote an article explaining more on this topic and what it means for queer youth: “‘Mature Content’ – How YouTube Restricting LGBTQA+ Content Harms Queer Youth“. Hey Qween’s host Jonny McGovern explains YouTube is delaying the release of Season 5 of the show, as all of the episodes are now being put under review before they can be posted. McGovern explains that YouTube is taking weeks to review episodes, therefore causing huge delays the show has never previously experienced. In his video explaining this, Jonny suggests that because Hey Qween is a queer show, this could be linked to the recent troubles with YouTube’s “Restricted Mode”. The hashtag #FREEHEYQWEEN has been donned, in support for the shows censorship. WERRRK.com‘s own Chiffon Dior had more to say on the topic here: “YouTube Pushes Pause on ‘Hey Qween’“, and you can watch Jonny’s video below.

There was a fabulous announcement from the queer London venue, Her Upstairs this week. Family Fierce mother Meth and her colleagues at Her Upstairs announced that the venue will be expanding to be taking over the whole Camden venue, formerly known as The Bloc. From Easter weekend, the venue with be known as Them Downstairs, and as Meth put, combined with the already kitsch Her Upstairs, the venue will be bringing London “more queer-per-square-metre than ever before”.  A Kickstarter was set up to help with the new launch, and the target was smashed by supporters in only a couple of days. Congratulations to Her Upstairs and Them Downstairs!

With Season 9 underway, and the first episode drawing in nearly one million views, it’s no surprise that RuPaul’s Drag Race is up for not one, but TWO MTV Movie & TV Awards. The show is in the running for “Best Reality Competition” and “Best Host“. Vote for Mamma Ru and the show here and here. May the best woman, win!

Drag trio the AAA Girls have been the source of social media hype this past week as it’s been revealed that Alaska Thunderfuck, Willam and Courtney Act will all be appearing in mainstream pop wonders Little Mix‘s new music video. The MV for the music video Power was shot a few weeks ago, and it wasn’t long until fans found out that the trio make an appearance. It’s been no secret that Little Mix girls adore Drag Race, as they’ve been seen sporting merch and attending shows. We can’t wait to see the video!

And finally Bravo’s Andy Cohen continued to be a huge supporter of the art of drag by featuring three of the four New York City queens from this season of RuPaul’s Drag Race, Alexis Michelle, Peppermint and Sasha Velour on last night’s episode of Watch What Happen Live!

Thank you for tuning into part two the premiere episode of What’s Poppin’ with Cherry Poppins as Cherry sits down to talk with the...