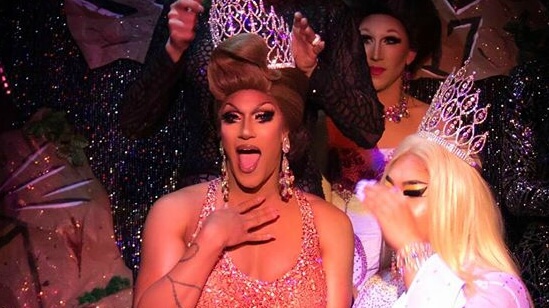 Welcome back to a special WERRRK.com Three Anniversary edition of #THEWEEKINDRAG!

Huge news this week! RuPaul has been named one of Time Magazine’s 100 Most Influential People. Mamma Ru is up there in the icons category, alongside Viola Davis and Simone Biles to name just two. Time’s 2017 100 list also includes leaders, pioneers, titans and artists such as Chance the Rapper, Sarah Paulson, LeBron James and Ryan Reynolds. Supermodel of the world Naomi Campbell wrote the piece for Ru in the list, which you can read here. Congratulations on this huge achievement, Ru!

Photo by Miles Aldridge for Time

New music this week, as New York legends from Season 9 of RuPaul’s Drag Race dropped a huge single. Sasha Velour, Aja, Peppermint and Alexis Michelle teamed up to creating fabulous new bitch track “C.L.A.T.“. Standing for “club, legend, art and theatre”, C.L.A.T. is a spoken word, rap track with ballroom scene vibes. The track speaks for itself, preaching how incredibly forward and versatile the New York drag scene is. Accompanied with a stunning music video directed by Assaad Yacoub and music by DJ Mitch Ferrino, this one will be on repeat for a while!

Keeping to the music theme, another Season 9 girl has dropped a single! Eureka O’Hara teamed up with Adam Barta and Kandy Muse to make electronic dance track “Body Positivity“. Produced by Mirrortone, the track does what it says on the tin. Empowering lyrics backed with a catchy dance beat, the track is fun and positive! Dropped just after (SPOILERS) Eureka’s shock elimination due to injury in Season 9, as well as receiving an open invitation to Season 10 of RuPaul’s Drag Race, it’s been a hell of a week for Miss O’Hara.

Meanwhile, pageant fever hit the Big Apple this past week as two new titleholders were crowned. Over in Hell’s Kitchen, Brenda Dharling was crowned the new Miss Industry, taking the reins from the previous winner, Tina Burner and over near the Upper West Side at The West End, Golden Delicious emerged victorious in the eight week long Ultimate Drag Pageant, following Mish Helle as the second ever winner! Congrats ladies!

And finally this weekend is the 3rd annual RuPaul’s DragCon in Los Angeles and ironically, its also going to  WERRRK.com’s 3rd time covering the event live from the floor of Los Angeles Convention Center! Be sure you’re following along with us on our social media ( Facebook, Twitter, Instagram) to live coverage, videos and pictures featuring our amazing team of Sidney, Spencer, Kaddie and Miss WERRRK.com 2016 Ivory Towers! And if you’re at the convention, be sure to come up and say hi to our team!