Hello Pop Tarts!  I’ve been away for a while remodeling my home and banging construction workers – so much work, let me tell you! – but now I’m back!

I was thrilled to have the opportunity to interview on of our most creative, quirky contestants from the Miss Bio-WERRRK 2017 pageant – Her?  This Denver-based “hyper-queen” speaks her mind and her truth, and I love that in a person.  I sat down with Her? recently, and we dished.

POPPY FIELDS:  Thank you so much for taking the time to chat with me, Her?  And no, that wasn’t my first question. (musical Southern Belle laughter)  No, my first question is, what was the inspiration for you to become a “hyper-queen” and start doing drag?

HER?:  My inspiration for doing drag started with RuPaul’s Drag Race! First it started as an insane love/addiction to the show, and from there it went into feeling super-connected to the queens. I felt like, “Omg, they’re complete weirdoes like me with huge personalities and a passion for music, performance, fashion, etc!” While watching Season 8, I remember telling myself, “holy shit, if I were a man I would be so good at this”. But I didn’t think anything of it because I had never heard of a “hyper drag queen”.

Two years ago I moved to Denver, CO and I started going to “Drag Nation,” one of the biggest drag shows in the US at Tracks Denver. They bring in different RPDR queens every month as well as having a regular Denver cast including Nina Flowers. There, I was immediately drawn to the Denver queen Yvie Oddly. I befriended her soon enough and one night told her that “I felt like a drag queen stuck in a woman’s body“. She quickly responded with, “Yeah that’s a thing, you should come over and paint with me sometime“. The rest is history and she is one of my best friends and drag mentor.

Her?:  Her? is someone who is confident, full of love, and also not afraid to make fun of herself. I picked my name for the Arrested Development joke, but also because I want to “shade” myself before anyone else can. Being one of the only hyper-queens to start out in Denver, a lot of the queens would announce our gender on the mic (still do). When you get introduced as a hyper- queen on the mic, two things happen: you immediately feel a separation from the other queens, and the audience quickly tries to figure out the meaning of your drag instead of enjoying the performance. Therefore I chose a drag name that you have to say with a “stink eye” and pronounce as a question! Her? loves her friends and fans more than anything and almost stops at nothing to make sure they are happy and safe. She is constantly looking to improve, learn choreography, and try new things so that her drag does not become stale.

Basically I am an anxious but extreme extrovert that wants to make this world a happier place. I love to perform education pieces on everything from gender to rape awareness but can also produce a fully choreographed Gaga number or roller skate to a disco song (I used to play roller derby!) Her? does not plan to stop now, as the wise Freddie Mercury once said.

PF:  I think that’s excellent advice from dear Freddie.  Speaking of Freddie Mercury, are there any male drag queens that are inspirations to you? (laughs) I’m joking … I’m joking … but seriously, are there?

Her?:  YES OF COURSE!  My three biggest inspirations in my drag birthplace (Denver, CO.) would be Yvie Oddly, Jessica L’Whor, and Kai Lee Mykels, who have all mentored me in a huge way. Even in their busy drag lives, they always took time to answer my questions and give me feedback even when I didn’t want it! (laughs) They all have such amazing gifts and really have taken Denver drag to a new level. My RPDR inspirations are Katya, Trixie, and honestly Tammie Brown. I like my queens weird, funny, and mesmerizing!

PF:  Let’s get uncharacteristically serious for a moment.  Have you ever experienced any discrimination because you are a biological woman doing drag?  What would you say to a male drag queen who might take issue with women doing drag?

Her?:  OH YES HONEY. First of all I want to say that “I GET IT,” and I understand and respect the “Herstory” of queens who paved the way for me to do drag. I’ve heard the “There’s no illusion“, the “Aren’t you cheating?”, and the ever lovely “But you don’t have to tuck!“.

Not that it’s anyone’s business, but my gender identity is very fluid. I came out when I was 24, which is pretty late in the game, and identified as a lesbian. Now I like to just call myself “queer” because labels are bogus and outdated. I am the biggest tomboy ever, and the extent of my daily normal makeup is a cat eye; needless to say my transformation is day and night. I would ask male drag queens who have a problem with me to really look inside and ask themselves why they think that I shouldn’t do drag? Growing up a woman is not easy; this world was made for and by men. If I am a respectful gay woman trying to improve my drag community and putting on a good show, what does it matter to you? In my opinion “traditional”  drag queens that have problems with AFAB (As Born As Female) Queens are usually struggling with backwards misogynist views.

PF:  Well said.  Now, how much a part of your artistry is social activism?

Her?:  Three months ago I started my own Femme drag show! Denver has been very accepting of this type of drag, but even still a lot of us will be the “one hyper/drag/trans or non-binary queen in the gig”. I wanted to start a show where ALL types of Drag are on an equal playing field. I came up with the name Hype Her Hour! This drag show was also invented so females/trans/non-binary/femmes, etc. could have a safe space (away from toxic misogyny) to enjoy drag. Our venue is Blush and Blu, referred to as the only lesbian bar in Denver! Lesbian bars tend to have a weird pretentious air to them and are honestly disappearing all over the US. My plan is to knock that stigma and make sure that this bar gets the exposure it deserves. I think all queer/gay bars should promote LGBTQ, but since that’s not how gay bars work, it does feel really nice to have this fun, quirky, lesbian-owned venue and bar. I am already informational in my hosting, but am working to further promote mental health options, safe sex/testing info, education on non-binary and trans etiquette, and women’s rights.

PF:  That’s wonderful.  And finally, here’s the question I always ask:  Why do you think drag has become so popular and “mainstream” now?  (Ru pays me to ask this question.)

Her?: I think drag is so mainstream because of how inclusive and accessible it is these days! You see RuPaul going mainstream on Vh1, and the internet has so many great informational videos on everything you need to know about starting drag. I know queens are known for being catty and petty, but the state of this world right now has brought us all closer I feel. We all want to feel our fantasies, teach, and entertain people through performance. I’m ready for drag queens to take over the world!

PF:  Well, the world would certainly be a more beautiful, sparkly place!  Make sure you buy stock in makeup companies before we do … we’ll be billionaires!  Her?, thank you so much for taking the time to chat, and I wish you the best of luck when the winner of Miss Bio-WERRRK 2017 is announced!

Her? can be found on the following social media: 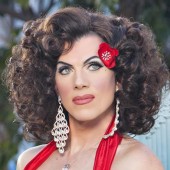