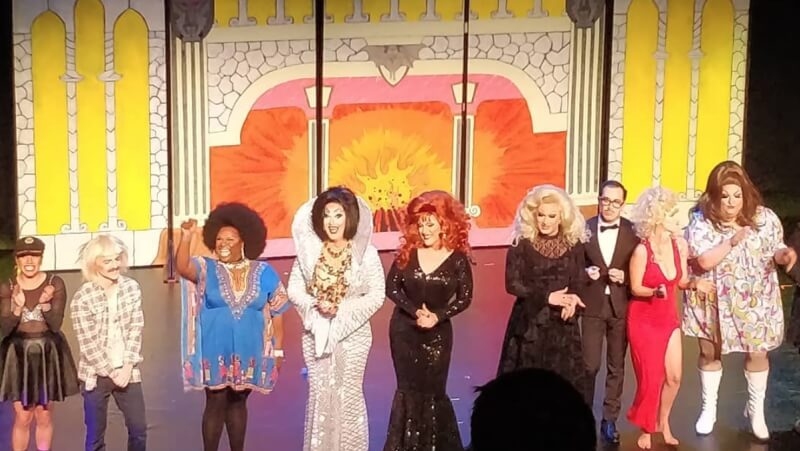 San Francisco native Peaches Christ is no newbie when it comes to producing a dragged-out parody of popular and cult-classic films. Her track record consists of such classics as Return to Grey Gardens, Legally Black, Whatever Happened to Bianca Del Rio? and most recently Trixie and Katya’s High School Reunion. However of late, she has begun to bring her shows all the way down I-5 to Los Angeles and audiences could not be more thrilled!

Her production of Drag Becomes Her, starring Drag Race Alum Jinkx Monsoon and BenDeLaCrème, premiered in Los Angeles this past weekend with a back-to-back two-show engagement at the Montalban Theater in Hollywood. From beginning to end the show was a roller coaster ride of riotous laughter and toe-tap-inducing musical numbers. The show featured five parody musical numbers written by co-lead BenDeLaCrème, including a vengeance filled version of “Look What You Made Me Do” by Taylor Swift, which brought the house down.

The cast was a triumph, between Jinkx hitting every line with the affected perfection originated by the goddess Meryl Streep, and DeLa’s incredible comedic timing and subtle physical nuances, it’s impossible to claim one over the other as the “star” of the show. If Tony Awards were given for off-off-off-off-off-off Broadway productions of drag queen parody shows, Jinkx and DeLa would simply have to split that little trophy directly in half, such was the amount of shared star-power on the stage.

With all that perfection, it might be easy for other cast members to be outshined, but Jinkx Monsoon and BenDeLaCrème were not alone on that stage, by any means. Long time writer/composer/performer and friend to Peaches, Major Scales, held his own alongside these two powerhouse women as Ernest Womenville, the plastic surgeon turned undertaker and woebegone husband, with the subtle expertise of someone used to having to share the stage with Jinkx Monsoon. And of course there was the queen who made this all possible, Peaches Christ herself, as the ageless beauty and peddler of “potion that stops time,” Isafella von Ramen-Noodles. To say Peaches pulled focus (in the best possible way) each time she stepped on stage would be a dramatic understatement. Between the non-descript, but possibly Romanian, accent and perfectly timed delivery of the not-so-subtle entendre laden lines, even her fellow cast members had to struggle to keep from laughing. The cheers and laughter each time Peaches delivered a line had to be waited out to keep the show moving – the true mark of a job well done in comedy.

The cast of extras and supporting roles also shone each in their own individual way, from delivery of lines, to incredible dance skill or facial reaction, every single cast member created a moment for themselves during the show. A member of the supporting cast that must be noted is April Kidwell whose rendition Anna Nicole rivals that of even the RuPaul endorsed performance of Adore Delano in RPDR season 6 Snatch Game. If Peaches can work Anna into future shows, she certainly should – put this woman on the permanent payroll!

As in every Peaches show, the sets were understated and practical, allowing comedy to be built around them with such memorable lines as “those stairs just off stage, not the ones we can clearly see, or that painted set over there.” The costumes were a brilliant nod to the original film, and a special round of applause should be given to Jinkx Monsoon, who must have broken some kind of quick-change record during the course of the show.

This is Peaches’ second time at the Montalban Theater, having come with her production of Sheetlejuice (starring Bianca del Rio) just last year. I think I can safely speak for everyone who attended that I hope it will not be the last. Peaches did allude to bringing another show down near the end of the year, so keep your ears perked and eyes peeled for the official announcement; I know I will.

If you simply cannot wait until year’s end, hop on up to San Francisco to catch Peaches’ next major production, Steel Dragnolias (starring Alaska Thunderfuck, Coco Peru and Heklina) on May 5th, tickets are available at peacheschrist.com.

The monsters were back after St. Lucia’s elimination. Yovska returned from consuming a lot of cow’s blood. Priscilla Chambers mourned the loss of her...

No point in beating around the bush, this episode had maybe the best lip sync in RuPaul’s Drag Race herstory! It was also Snatch...

This past weekend I had the absolute pleasure of attending the Peaches Christ production, Troop Beverly Heels, staring the one and only Trixie Mattel....