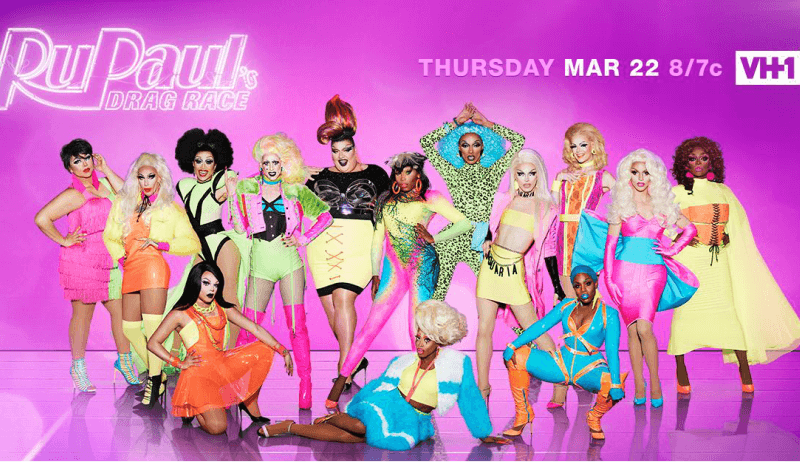 I’m back from saving the whales with Tammie Brown and just in time for Snatch Game! Monet X. Change said it best, Snatch Game is the drag queen Christmas. This season’s panel of fake celebrities was a strong one! Plus the queens got asked the age-old question on the runway, who should go home?

The queens returned to the workroom after Blair St. Clair’s elimination. Blair came off as such a sweet individual to the audience and it was touching to see how highly the other contestants thought of her. On the couch, the girls addressed what was said to them on the runway. Monique Heart was upset, thinking her runway looks are what prevent her from grabbing a win. She struggles financially and typically makes her own outfits within a 30-minute time frame. Miz Cracker emphasized that she still gets a lot of praise on the runway and should take it as a compliment that the judges appreciate the looks she turns out with limited resources even if she isn’t winning challenges.

It was a new day in the workroom and it was time for one of the most iconic mini challenges in the history of RuPaul’s Drag Race. Because reading is what? FUNDAMENTAL. The girls this season really stepped it up for this challenge. Everyone was SO strong. This was the first season no one’s reads were truly cringy, which was nice. Eureka O’Hara was the winner.

Ru then announced it was time for SNATCH GAME! Everyone’s favorite episode of every season, Snatch Game is an absolute staple. Some of the queens shared who they were planning on impersonating. Kameron Michaels selected Chyna, because of course. Monet was planning on doing Maya Angelou, and The Vixen planned on being Blue Ivy, Beyoncé‘s daughter.

Ru came back into the workroom to check on the queen’s progress, but she wasn’t alone. In came Season Six winner, Bianca Del Rio! Bianca is a comedy legend who slayed Snatch Game as Judge Judy. No one could have helped prepare these girls better than Bianca.

Going around the room, Bianca gave out some pointers. She helped Eureka decide on her character, Toddlers and Tiara’s star Honey Boo Boo. She attempted to help a struggling Monique on coming to a conclusion with her character. She encouraged her to be the political icon, Maxine Waters, which ended up not working so well for her. Asia O’Hara wanted to do Whitney Houston but was encouraged not to after Ru advised her not to make any drug jokes. She decided to take a risk with Beyoncé, a celebrity that has been done before and not well. The Vixen and Asia decided to work off each other, seeing as they were going to be a mother and daughter on the panel. Aquaria debuted her Melania Trump character, noting that she doesn’t find herself funny. She proved herself wrong this week.

Time to play Snatch Game! The guests this season were Audra McDonald and Kate Upton. The game started out strong with Melania Trump presenting Ru with a gift from Tiffany’s. Upon opening, Ru found a note that said: “help me!”. Yikes, too real. Though Kameron Michael’s Chyna was a bit understated, she nailed the voice and look, while also having some great props. Miz Cracker didn’t get much airtime, but when she did she landed some good jokes. Monet was absolutely hilarious, putting Chi Chi Devayne‘s All Star’s 3 performance to shame. Eureka was the perfect Honey Boo Boo, stating that she couldn’t write and was just constantly drawing pictures on her answer cards. Overall, this group was strong.

Not everyone shined, unfortunately. Monique’s Maxine Waters was completely flat. She didn’t go far enough and relied on recycled jokes. Asia’s Beyoncé and Vixen’s Blue Ivy were rough. They didn’t get very many jokes in and relied too much on banter together. It got a bit messy and chaotic. Asia played Beyoncé has a very mean character, to which Monet said in a confessional, “Someone needs to call CPS on Beyoncé“, which was one of my favorite lines from the episode.

It was elimination day and the category on the runway was mermaid eleganza. Everyone was pretty shaken by Snatch Game. People who were usually confident in their place in the competition were sweating about their Snatch Game performance. Like Monique said, #noonehasedges, they’ve been snatched. Vixen was hoping for some positive critiques on the runway, but Asia quickly chimed in she wouldn’t be getting it this week. She thought they did a terrible job. Vixen confronted Eureka, saying she thought she stepped on too many toes during the Snatch Game. Monet explained in a confessional that she was just jealous Eureka succeeded and rather it was Asia who did more of the stepping.

While the queens were getting in drag, they started talking about politics in drag. This is a subject I am very passionate about, so every time I hear the queens discussing it I nerd out a bit. Monique opened up that she wanted to wear an ode to Ru’s confederate flag dress on the runway but was too afraid of the backlash. She lives in a former slave state and feels the effects of it every day. Vixen opened up more about the political performances she does in Chicago. She is an activist with a loud voice because hers has been silenced so much throughout her life. I respect the Vixen’s fight for LGBT people of color greatly.

On the runway, the queens were rolled in wheelchairs by the Pit Crew due to their crazy mermaid tails. What a brilliant idea. Kate and Audra joined Carson Kressley and Michelle Visage on the panel. Kameron and Cracker were safe. We also got yet another Miss Vanjie moment on the runway thanks to Ru and Michelle, so I was thankful. Here are the judge’s critiques of the top and bottom queens!

Aquaria: The judges loved her oil spill look. She got nothing but positive critiques. She nailed her Snatch Game performance and runway. She was the winner!

Monique Heart: Monique got read pretty bad. The judges thought she really struggled in the Snatch Game and that her outfit looked poorly done. She had a bit of an issue with these critiques. Michelle thought she wasn’t present enough. She was bottom two.

Vixen: The judges were not fans of her look at all. It looked a bit cheap and her boobs were far too spread apart. They did love the look from her neck up, though. They thought her character was completely flat. She was bottom two.

Monet X Change: Monet continued to impress this week. Michelle noted that a contestant on All Stars 3 had done Maya and it had gone poorly. She insisted that Monet’s version is how you do Maya! They also really enjoyed her outfit. She was safe.

Eureka O’Hara: Eureka had yet another strong week! The judges loved her look on the main stage and her performance on the Snatch Game. She was safe.

Instead of letting the girls go back and untuck right after critiques, Ru asked the age-old question. Who should go home? It was an overwhelming vote for Vixen to leave the competition. She retaliated by throwing Eureka under the bus for being annoying. She said some pretty harsh things and I couldn’t help but feel bad for Eureka at that moment.

It was time for a lip sync. Vixen and Monique lip-synched to Cut to the Feeling by Carly Rae Jepsen. Bad news, Monique didn’t know the lyrics. Not even a little bit. She also lost her wig along the way and looked a bit messy because of it. It was fairly clear Vixen had this lip sync in the bag.

What did you guys think of this week’s episode? Do you think the right queen went home? How do you feel about all the drama? Let us know in the comments below and be sure to come back next week as we discuss the CHER TRIBUTE the next episode includes. Finally, we get a Cher tribute! I could not be more excited!

For another take on this week’s episode of RuPaul’s Drag Race, check out our friend Gilda Wabbit’s Wabbit Wuview as well and be sure to Like, Comment and Subscribe!

Press Release: “Drag Race España” Debuts on WOW Presents Plus This May

We got a lot of emails from drag artists, musicians, queer performers and lot of other creative types, as well as PR companies and...

Every season of RuPaul’s Drag Race features a roast challenge. It’s something we’ve come to look forward to. We love to watch the queens...

I’m not sure who came into this week’s episode feeling more grief over the loss of Denali: Me or Rosé. After last week’s controversial...