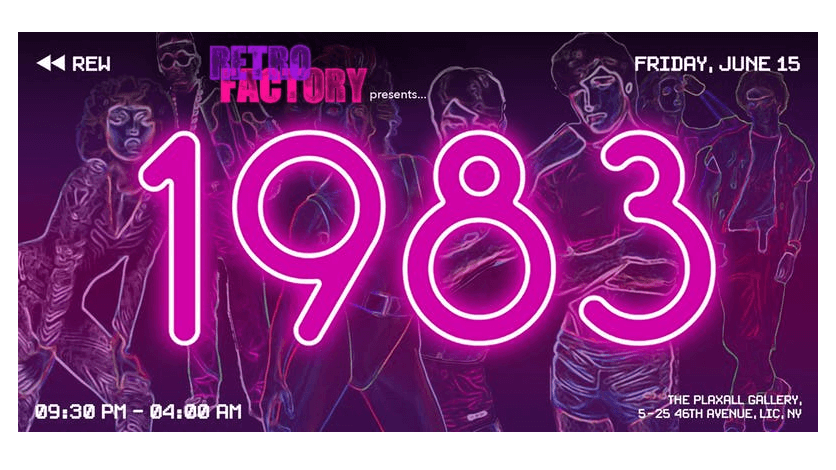 If you live in or near New York City and are looking for a way to kick off Pride Weekend with a bang, look no further. I had the chance to chat with two of the producers of a brand new event, Retro Factory, about their Pride weekend party “1983,” and I have to say, if I could hop on a flight to New York, I would. Here’s what they had to say…

Paige: First off, can you tell me about yourselves?

Zach: OK I’m Zach Job, I’m 36 years old, lived in New York since ’99 and really in the last maybe two years I’ve gotten back into “the scene,” going out partying and dancing, it’s something I used to do back in the day. I rediscovered a lot of new places, mostly in Brooklyn and Queens. So, that’s kind of what I’ve been doing. I actually work in video production I’m an artist at heart. I’ve always spent a lot of time doing photography, painting, I’m now a drag queen, so that’s something I’ve been exploring, in performing and you know creating looks and all that stuff. But it all kind of fed into this path for me to get into this arena and now produce these parties for myself, and collaborating with Carlos.

Carlos: I’m Carlos Armesto, I’m 44, and I came to New York in ’97. I’m a theater producer and director and when I first got here I was really excited about the party scene that existed. But, that scene just kind of went away. Then I began creating theater and working on my company, which is all about the hybrid theatrical experiences; I always wanted to do a dance party kind of thing, and then I was lucky enough to score a partnership with the Long Island City Artists, I always wanted to create parties or events that are a communal experience that have a theatrical element to it. I was really inspired by “Here Lies Love” and “The Donkey Show,” but it’s hard to do, to find the space that really allows for that and all of people to recreate it. So I said well why don’t we just do something just a party and then assemble something simple, like create little dance performances of those songs that we love. So, what we were trying to create, as everyone’s dancing and having a great time, there’s interruptions, live recreations of 1980s iconic videos, so that the audience is participating in them and also watching them. So, it’s like a little five-minute flash mob and they’re gone and you keep on dancing. I’ve been wanting to do this kind of a party, I think for about a year and a half, and then I was so fortunate to find Zach and Chad [Ryan] as partners, who are helping create this incredible experience.

P: Can you tell me more about the origin of this event? You had the space, but how did it come to fruition?

C: So the organizers, the people who run the Plaxall Gallery, [and I] did a workshop of an immersive musical there September, we took over the entire space, we were able to create a piece that integrated the gallery showing in a specific way and it was an immersive piece, I think very big and I really like to have complex projects. We wanted to create an environment that was very welcoming to the queer community, that was a pride event. Something we might not have seen in Long Island City. What’s exciting about it is, we don’t see many of these events in Long Island City, the neighborhood is going through major changes, a lot of development there. We’re trying to make this part of a cultural magnet for people in New York City, an alternative magnet.

P: And Zach what drew you to this event?

Z: Well my husband actually was brought in first, he’s a producer and when I heard that he was involved I want to be involved too, I really enjoy the special events that are a little bit off kilter. I like these kind of places that are not only super inclusive, but also offer something other than just music alone, that have an extra element that’s exciting for a guest. We’re offering that with the dance performances, but also in the career space I think it’s important to also really bring in diversity and make inclusion a huge mark. That’s something that’s my mission in this. We’re definitely reaching out and trying to make sure that we have that, all of our main headliners, our DJs, are queer, our MC is a drag queen, we have dancers that are queer, choreographers… I think that’s important especially since this is going to be a Pride event but it’s something we want to continue moving forward as well.

Z: Right! And we’re offering codes to women, demonstrating that we want them there but also to make a point. We have a code called WageGap1983, which basically takes account the gender wage disparity from that era which is about 36% lower for women. So you get a 36% discount if you identify as a woman. So we’re trying to get that word out to encourage more women to show up.

C: The way it came about, I had this party idea but I needed help, Zach and Chad came along like ‘ok, let’s call it something.’ We came up with Retro Factory, and this kick off is going to be the first in a series. We have other ideas for other parties later on this year and next year with a performative element that occurs, we’re very, very stoked about that.

P: How about just a little teaser?

C: I think for me, I loved 1984 – the parties at The Pyramid – and I loved the music and the environment, I haven’t found that sort of environment that was really fun and cool, and a little risqué and dark which sort of honored that time. I mean I’ve gone to many parties after that but they were all very kitschy and kooky. We’re trying to create something grittier, more interesting and more…

C: More sexy yeah. I love to dance and I really love to dance to that music, I just forget anyone else is around; it connects to me in such a crazy way because it was so formative in my life. And I really wanted to share that with everybody.

P: Obviously there are many talented drag queens in New York, and you’ve brought in one of our favorite queens here at WERRRK.com, Chelsea Piers. What made her, in particular, the right fit for 1983?

C: Well, she’s fabulous. She loves the 80s, and we had a connection to her; one of our composers is her boyfriend. But, she gets what we’re trying to do; when I presented it to her, her reaction was ‘Oh my God. Yes. Let me do this.’ And now I’m like, oh thank God, I’m so glad that she’s on board.

(Editor’s note: We managed to get a few worlds from Chelsea herself about the big event!)

“The collective minds behind this party are what make it so exciting. It’s a collision of visual art, theatre, and nightlife. We’re going to relive the queer liberation of the 1980s in a sexy, innovative, and inclusive space. I just hope my hair will fit in a car…or the 7 train.” -Chelsea Piers

P: So we touched on the live re-creation of iconic videos, what else can you tell me might be featured, or that people might expect?

C: We have will have a little ‘step and repeat’ from Dirty Sugar Photography, they’re going to do a little photo op for anybody who comes in, and they can get the picture directly sent via e-mail to them which is exciting. We’ll have a wonderful bar and we’ll have a specialty punch created.

Z: And visually there’s going to be a projection wall that [will feature] some throwbacks to some videos and of course neon, neon everywhere. And the space itself is really cool. It’s a new space that has always intrigued people, there’s a little outdoor area that kind of overlooks a little bit of water.

C: It’s a little dock that you can see the skyline is right there. A little smoking area, if you want to call it that.

Z: And then our head DJ is Bright Light, Bright Light. He’s a big name from London but making a splash in the U.S. and especially in New York, specifically Brooklyn, so I think that’ll draw people in as well.

P: Awesome! So now that I’m intrigued. When is it, where is it and how can I get in?

Z: Don’t forget to use the code WageGap1983 if you identify as a woman.

P: What are you most excited about?

Z: I’ve been to a lot of Pride parties and they all seem to be geared toward the same demographic, I’m excited that this party is really catering to a diverse audience. I think it’ll create a really cool environment.

C: I’m most excited about the event is the voguers who are coming. We have an entire onslaught of voguers who are going to be part of one of the dance pieces, but they are from every demographic you can think of. It’s reminiscent of “POSE” [on FX, written by Ryan Murphy], which is an amazing show.

Z: Something that I’ve noticed is when you have this sense of community and this idea that anything goes and everyone’s welcome, people really let go, and the dancing really takes off.

P: Is there anything else people should know? Do they need to dress up?

Z: Dress is definitely encouraged, but not mandatory. I’m going to be in my drag persona, Glow Job, we definitely want to encourage looks. I’m sure there will be some extreme looks and some people might just put on some neon, and that’s great too!

C: I’m going to encourage Chelsea to come as Alexis Colby or something like that. She’s got the look!

P: Is there anything else you wanted to say?

C: We hope everybody can come. Everyone we’ve talked to has been pretty receptive to this; we’re really excited and can’t wait to see everyone there!

If you love neon, 80s music, dancing, drinks, great views, or/and a feeling of community, Retro Factory is sure to be the spot for you. Make sure you buy your tickets at eventbrite.com and head on down to Plaxall Gallery, located at 5-25 46th Avenue, Long Island City. This inclusive Pride kick off is not to be missed!

Though many Pride parades and celebrations have been canceled due to  the pandemic, there is no stopping the spirit of Pride month. We have...

It’s time once again for THE WEEKLY INSTADRAG (well, Weekly-ish), where we spotlight our ten favorite recent drag-related Instagram posts! If you’re a drag performer or photographer and...