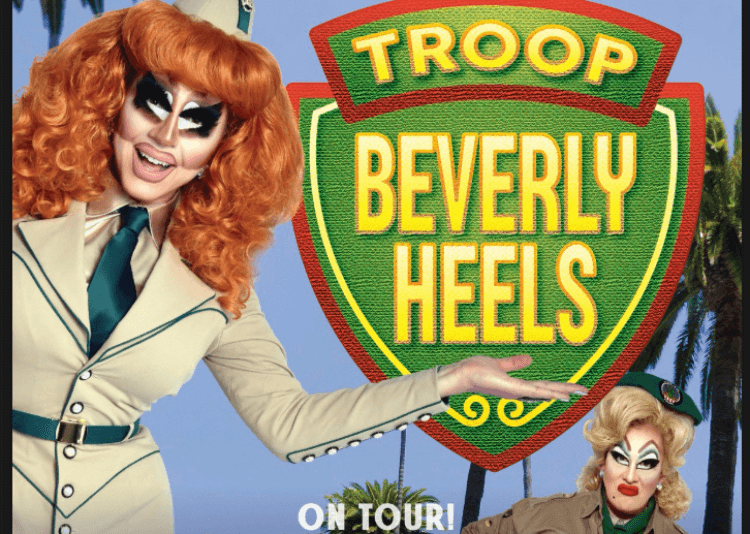 This past weekend I had the absolute pleasure of attending the Peaches Christ production, Troop Beverly Heels, staring the one and only Trixie Mattel. I don’t typically like to put it all out there right up front, but I honestly can’t figure out a way to tip-toe around the fact that this was the most amazing Peaches show I have ever seen. Which, if you have ever seen a Peaches Christ Production, is really saying something. San Francisco Drag Darling, Peaches Christ, never fails to impress. Her productions are always fun, witty and funny without fail, so it’s not to say I was surprised to be blown away with the spoof of the 1989 Shelley Long cult classic, Troop Beverly Hills, but rather that I am in awe of how Peaches manages to constantly raise the bar on her own productions.

Let’s start with the Drag Race All-Stars 3 winner and skinny legend herself, Trixie Mattel, who in a fabulous ginger wig, kept the audience smiling from start to very end. It’s already known that she is no stranger to the stage, so I was expecting to be impressed, but the ad-libbed moments about having to bend over in a corset, the use of her ever-lit “cigarette” to adjust her bangs, and the live-sung performance of “Kum ba ya” were a real treat. And after all was said and done and standing ovations were received, Trixie treated us all to a song she had written specifically for the production – now I’m one of those suckers who could just listen to Trixie sing all day, I’m not particularly a fan of country music, but there’s just something about her voice that compels me to buy the albums and listen to that song about the lesbians on repeat, but even I wasn’t expecting real tears to come to my eyes during this little post performance number, but there I was, reaching for a tissue. The number was both catchy and moving, and the perfect top off to an already spectacular show.

Peaches Christ was, as usual, indescribably brilliant as the overbearing, boorish and fun hating scout leader “Velda Plunger.” It all begins with her writing, of course, which never fails to bring the laughs and include a few sly remarks regarding current events and fellow queens alike, but beyond her own remarkable writing, Peaches brings nuances to her characters that are an equal mix of reminiscent of the original, and completely her own. Usually her shows are tailored around her hometown, San Francisco, but this show, given that the original movie was set in Los Angeles, was very “L.A.” (and if you’re in L.A. you know what I mean by that) which I absolutely loved. There are really not enough ways I can say how much I loved this show, and really, how much I adore Peaches.

From the brazen Red Feathers to the five girls making up Troop Beverly Heels, Rosa the maid, Assistant Troop Leader Annie Herman (no relation to Pee Wee) and the various parents, the entire cast was a smash! Every single person managed to shine and make a moment their own, no matter how small their part may have been. However, a special shout out must be made to Los Angeles’ own Meatball, who played the mouthy and hilarious Jasmine. With her one-liners and dance-moves Meatball all but stole the entire show, proving that even losing your skirt mid-performance should never cause you to break character. Making the night even more special, the absolutely gorgeous Tasha Scott, who played Jasmine in the original film, was in the audience and received her own thunderous round of applause post-show. Tasha, if you’re reading this, thank you so much for being one of my favorite characters in one of my all time favorite movies. I know the cast was honored by your presence, and I hope you agree with my glowing review of their performance.

Unfortunately, the show was a one day, two performance, event so I cannot encourage you to rush out to see it; but what I will encourage you to do is to check peacheschrist.com regularly for updates on new shows and tours, keep your eyes peeled for the official announcement of Peaches’ next production, Mean Gays, coming to Los Angeles in March 2019, and to follow everyone in the cast on social media. I will leave a few links below.

Meow Mixx: Crystal launches “The Things That Made Me Queer”

“Has The Quarantine Saved Drag?” by Dévo Monique

I know we are in the midst of a worldwide pandemic and are dealing with all the tragedy and uncertainty that comes with it....

Drag World London 2019 is over and done within a blink of an eyelash, with what has been no doubt its most successful year...

The monsters were back after St. Lucia’s elimination. Yovska returned from consuming a lot of cow’s blood. Priscilla Chambers mourned the loss of her...