Ginger Minj Milks the Laughs in Her Latest NYC Show

Sharp and spicy, with distinct notes of sweetness, the many flavors of Ginger Minj blend quite well together, when added to the melting pot crowd that tends to pack drag shows at NYC’s Laurie Beechman Theatre.


It was a good Friday for Southern Baptist-raised Minj, as the fast-quipping queen and self-proclaimed “nicest bitch you’ll ever meet” kicked off her three-night run of Happy New Queer — a collection of gay anthems, audience participation, and massive backpeddling on her introductory promise not “to get political or preachy.”

Making her entrance with unusual flair (the loss of a regal heel as she approached the stage caused her to observe, “I’m like a dyslexic Cinderella”), Minj’s opening show tune was “Keep it Gay,” the witty ditty Gary Beach once slayed, on Broadway, in The Producers.


The rest of the show had songs aplenty (all sung live), and used the framing device of a four-person “Big Gay Dance-Off,” in which volunteers from the audience strutted their stuff, until only one was left. Eliminated contestants were humanely, if firmly, told to “sashay away,” and did so with some Minj merch in tow (all available for purchase by the rest of us, she repeatedly noted, after the show).


Minj’s co-opting of that RuPaul’s Drag Race exit phrase wasn’t the only reference made, with the one-time contestant throwing occasional shade at Season 7, All-Stars 2, and fellow queens. But the best zingers came from good-natured digs at the audience (“Everybody looks so beautiful… in the dark”) and herself (“I almost #MeToo’d you,” Minj said, after brushing up against a lesbian dance-off contestant).


It’s a good time in the career of Minj, as noted in several pre-show videos (excerpts from her voiceover work on Super Drags, her standout role in Dumplin’, and the video for a cover of Dolly Parton’s “Jolene,” starring Minj and a gaggle of other queens, including Alaska and Manila Luzon).


Calling hubby CJ onto the stage to help her into a pair of roller skates, Minj proceeded to glide through the room, while crooning the title song from a certain much-maligned Olivia Newton-John film. Then Minj dropped a bit of breaking news: She’ll soon be touring with Jinkx Monsoon, in Xanadu.


As for Minj’s Friday night performance, those who instead chose to stay at home or hang in a club, to watch the concurrently airing episode of  Drag Race, were missing out, and missing the point: Televised drag will live forever, on tape — but live drag artistry offers an intimacy that can’t be duplicated. 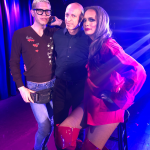 Once upon time, in a land far far away (the South of England) I stumbled upon a quaint little show by the name of...

2015 was a big year for music by drag queens, maybe the biggest year ever! We had a hard time narrowing our choices down...

One of my first ever interviews was with Mackenzie Claude, fresh off his appearance on RuPaul’s Drag Race several years ago and he...

WERRRK.com 2015 Bio Queen of the Year

Drag has gotten so big that even biological women are getting in on the act! This category is recognizing five of the best bio...