Diamond in a Rhinestone World: The Costumes of Dolly Parton

A Haute Second with Spencer: The 13th “Art of Television Costume Design” Exhibition 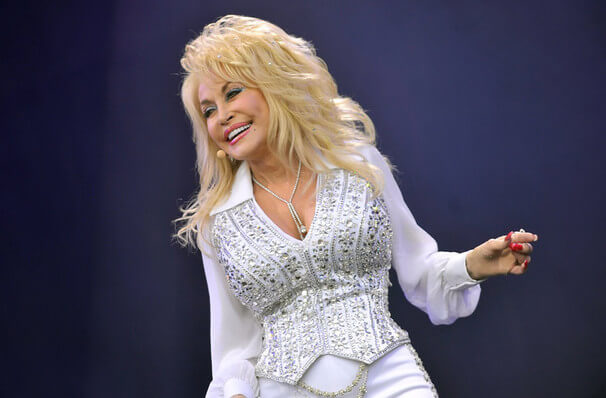 The Grammy Museum is “a non-profit organization dedicated to cultivating a greater understanding of the history and significance of music”. Last week, I was invited to the Downtown Los Angeles Grammy Museum for a super special, sneak peek of their fabulous new exhibition.

When I heard about this new exhibition, I literally felt like it was too good to be true. It must be a rumor. Days later, there I was standing in the center of a room covered from carpet to ceiling in Dolly Parton costumes and memorabilia. The Queen of Country’s entire wardrobe had exploded all over this room and I don’t think I could be happier! Let me give you a few of the highlights.

“I probably have thousands of dresses from over the years. I had a hard time letting go of some of my favorites, but I’m excited for them to be included in this exhibit but I can’t wait to see them on display at the GRAMMY Museum!” says Dolly about the museum.

As I came up the escalator, the first piece I immediately recognized was the simple yet iconic yellow top and floral skirt Dolly wears in our favorite movie, “9 to 5”. That fact that I was so close to this outfit (basically fogging up the protective glass) was really just a mind-blowing experience. Is this a good time to bring up the need for a “9 to 5” revival?

The Best Little Whorehouse in Texas (1982)

Right around the corner, your attention is immediately demanded by the incredible red ruffle dress. I mean, seriously! It does not get better than this. This dress is so stunning in person. The detail is everywhere, from the ruffle all the way down to the sequins gliding across the floor. This costume is a must-see!

This exhibition includes a few outfits that were worn for the 2004 Dollywood Foundation Benefit Concert. My favorite benefit concert outfit being this purple shirt dress with embroidered ruby red flowers on it. You can feel the positive, colorful energy of Dolly just by standing near this dress.

Remember the 2017 Emmy Awards and that 9 to 5 reunion gave us all the feels? Well, imagine walking around the corner and seeing that same sparkly white dress in person that Dolly wore. After I blacked out for a few minutes, I stood up and just stared in awe. This dress sparkled so beautifully, I cant even describe it. You have to see this one in person.

The next outfit that caught my eye was the iconic cheetah print dress with the iridescent pink cover-up from the “Backwoods Barbie”. Oh I know you all are singing the song in your head already… “I’m just a backwoods Barbie, too much makeup, too much hair. Don’t be fooled by thinkin’ that the goods are not all there!” Ugh, such a cool set!

Finally, I came upon a set of costumes from the legendary Porter Wagoner Show. Produced in Nashville from 1960-1980, virtually every well known country music performer had appeared over the years on this show. Porter Wagoner introduced the world to a young Dolly Parton as his female co-star from 1967 to 1974. A few of her costumes found their way into this exhibition and I really feel like you should go see them!

There is so much more in this exhibition that I did not show you, mostly because I want you to see it for yourself. Dresses, costumes, instruments, portraits, music videos… it’s all there. If you have ever listened to a Dolly Parton song, seen a Dolly Parton movie… hell, even if you remember seeing Dolly on the Hannah Montana show back in the day, there is something in this exhibition for you.

As the Grammy Museum guides you through the exhibit, you are reminded of what an absolute legend Dolly Parton is and how incredible her touch on this world has been. I absolutely loved this exhibition and I know you will too.

Eight-time GRAMMY® winner, Recording Academy Lifetime Achievement Award recipient, and Oscar-nominated artist Dolly Parton has been widely renowned as not just a music legend, but a fashion icon. To showcase iconic costumes and pieces from her personal archive, the GRAMMY Museum® proudly presents Diamond In A Rhinestone World: The Costumes Of Dolly Parton presented by City National Bank, which will be the first exhibit Parton has had in the United States outside of her Tennessee theme park Dollywood. The exhibit opens to the public on February 5th and will run through March 17.

Follow this link for tickets to “Diamond in a Rhinestone World: The Costumes of Dolly Parton”

In this article:Dolly Parton, fashion, spencer

I can’t believe we’ve made it to the 93rd Academy Awards! After everything we’ve been through, it was so lovely to sit back and...

Well y’all, we did it. We endured a season of RuPaul’s Drag Race in the midst of a global pandemic. From scandals to COVID-19,...

Hello friends! Oscars® season is here so you know what that means…We are heading back to The Fashion Institute of Design and Merchandising for the 28th...