A Haute Second with Spencer: The 13th “Art of Television Costume Design” Exhibition 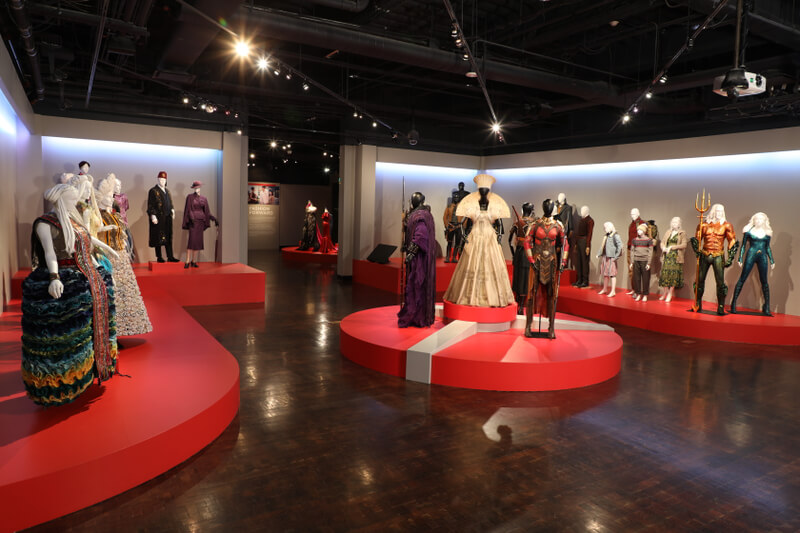 Hello friends! I am so excited to share with you another museum exhibition where you can experience first-hand, the beauty of fashion and costume design. This time, we are heading back to The Fashion Institute of Design and Merchandising for the 27th Annual “Art of Motion Picture Costume Design” exhibition.

This year the FIDM museum is featuring more than 25 different films with over 100 costumes present. All five of this year’s Oscar® nominated costume designers have work represented within the museum. This major exhibition is the only one of its kind in the world that pays homage each year to the creativity of the costume designer for film with a museum show of outstanding costumes and Oscar® nominated designs.

2018 was an incredible year for costume design! Let’s take a look at some of the jaw-dropping costumes you too can view at the FIDM museum!

Prior to the event, I was constantly checking with sources to find out if the famous Black Panther costumes were going to make it to this year’s exhibit. While it sounded like a positive thing, I was trying not to get myself too excited just in case it didn’t happen.

As I stepped into the room, my eye was INSTANTLY captured by the center platform, topped with some of the most recognizable costumes from the
Oscar® nominated film, Black Panther. I got instant chills. These costumes are just as beautiful in person as they were on the big screen. The amount of detail in each of these designs is really, truly impressive.

In my opinion, Ruth Carter has set the new golden standard for costume design and I am almost certain she will be winning the Oscar® for Best Costume Design. She deserves it. You must see these costumes in person.

One of the more interesting sets of costumes to me came from Mary Poppins Returns designed by Sandy Powell. Obviously I had seen pictures of the painted dress and suit from the film. However, seeing the actual painted garments in person was so exhilarating! These garments are so detailed and the paint is really incredible. I always say costume design is one of the most beloved art forms, but these canvas like garments really take that sentiment to another level.

A Wrinkle in Time (Paco Delgado)

If you are looking for a costume that uses a variety of soothing color combinations and textiles, then go no further than the costumes of A Wrinkle in Time by Paco Delgado. I was so drawn to the use of textiles in these costumes. It’s almost like the costume designer used a form of sculpture art to build these costumes. The most fascinating of all the textiles used was the quartz shaped material to create the crystallized skirt for Oprah’s dress. The skirt is so stunning, plus; it was worn by Oprah so…

A Star is Born (Erin Benach)

I’m off the deep end, watch as I dive into these costumes from A Star is Born, designed by Erin Benach. I am a huge fan of the costumes in this film and I still stand by the fact that I believe Erin should have received a Oscar nomination for the costume design in this film. Erin had to develop an entire story-line for Ally (Lady Gaga’s character) to be portrayed through costume. This exhibit gives you a perfect example of my point – the outfit Ally wears before her rise to fame in front and the blue velvet Ally wears in the back. Brilliant costumes!

There were some incredible period pieces within the museum, most notably The Favourite. Not only are these some of my favorite costumes, but this film represents Sandy Powell’s second Oscar nomination of the year! The costumes show a strong profession in construction, as well a perfect example of how costume moves the progression of a character. Congrats to Sandy for earning not one, but two nominations!

Thanos might have obliterated half of the universe, but luckily the costumes of the Avengers made it back to FIDM safely! I mean, just wow! First, seeing the T’Challa suit in person was a true experience. FIDM could have just used that costume alone, but nope… they also had to display costumes worn by Scarlet Witch, Captain America, Black Widow, and Thor! Be right back, my heart is exploding with joy.

This costume exhibition wouldn’t be complete without the contribution of Julian Day’s costumes for Bohemian Rhapsody. The spirit of Freddie Mercury is alive within the halls of FIDM. My favorite piece was of course the metallic leotard and the Adidas shoes. But what was most interesting to me was seeing the white tank-top and light blue jeans only because it is such a simple yet powerful outfit. It is so funny to me how combinations of colors, shapes, and textures can trigger your mind of a certain memory like this white tank-top and jeans ensemble seen on Mercury at the Live Aid concert in 1985. I recognized it immediately.

Lastly, I want to point out the incredible costumes from Mary Queen of Scots, designed by Alexandra Byrne. Umm, I am in love with these. Specifically, the Queen Elizabeth I gown worn by Margot Robbie. I have always been obsessed with Elizabeth I and this costume is such a fantastic adaptation of the very classic look we all associate with the fierce queen. If it were up to me, I would change the laws so that we all must dress in similar outfits as seen in the Mary Queen of Scots film.

As you can see, there are so many fabulous costumes. The cool part about it is, I only showed you eight of the more than twenty five different films shown within the exhibit. So, you are going to have to go check it out yourself to discover what else lies within the exhibit.

This exhibition is free to the public and is open Tuesday, February 5th – Friday, April 12th, 2019. Visitors’ hours are Tuesday through Saturday, 10:00 a.m. – 5:00 p.m. Located on the campus of the Fashion Institute of Design & Merchandising, FIDM. Museum is at 9th Street and Grand Avenue.

Don’t forget to tag your pictures with #WERRRK so we can see all of your beautiful photos! I hope you all have as much fun as I did. I’ll see you at the Oscar’s red carpet, taking place Sunday, February 24th!

Follow this link for more information on the FIDM Museum & Galleries

I can’t believe we’ve made it to the 93rd Academy Awards! After everything we’ve been through, it was so lovely to sit back and...

Hello friends! Oscars® season is here so you know what that means…We are heading back to The Fashion Institute of Design and Merchandising for the 28th...

Red Carpet Season Has Begun! Hello everyone! No, your eyes are not deceiving you! It really is me, which means Red Carpet season… has...