Too curious to stay away, but too proud to own up to their less-than-stellar accomplishments, a pair of Bushwick-based best friends (“two of the fiercest queens in town, or so they thought”) are determined to make a splash, when the Class of 1999 returns to the hallowed halls of Toledo, Ohio’s Basilcomb High School.

Armed with the friendship dynamic of Laverne & Shirley, the always-in-a-pickle shenanigans of Lucy and Ethel, and the in-synch dance moves of any given boy band, Jackie and Chelsea concoct a batch of outrageous, unsustainable deceptions, to impress the old mean girl crowd and, perhaps, win the hearts of their unobtainable high school crushes.

All this plays out during a raucous road trip, at the titular reunion, and back in NYC, present and future tense. Along the way, there are plenty of flashback scenes that trace pivotal moments of their youth (the highlight of which sees the duo performing “Eye of the Tiger” for the school’s wrestling team, with color commentary by two young dudes who look eerily similar to our girls, out of drag).

WERRRK.com caught the spirited March 6 premiere, and then caught up with Jackie and Chelsea, to get the skinny on how the show came to be.

CHELSEA: I think our friendship is so rich, because our personalities are different in a lot of ways, but we share a lot of the same values. Some of my shortcomings, Jackie guides me through, because she has a more pragmatic, compartmentalized approach to things, and the same is true, vice versa… I feel like Romy carries Michele in the movie, but in this show, the dynamic is different… It speaks to how we rely on each other, but sort of through a different lens. It’s not exactly like our [real life] friendship. There are these things that we value in our friendship, like sisterhood, family, collaboration, but it’s interesting, because the script is kind of flipped… I always joke that Jackie coaches me in making decisions, but in the show, her character is kind of like the ditzy one who can’t make decisions.

JACKIE: Certainly the character of Jackie Cox is always a little naïve to the bigger problems, either in the world, or around her, which I think is a through-line in all of my shows, the idea that she takes things mostly at face value, which is sometimes to her benefit, sometimes to her detriment. But in this show, she doesn’t really see all the problems that Chelsea’s character sees. She just remembers all the good things about high school, and all the fun parts about high school. So it’s a fun little twist on our actual, real-life friendship… and we incorporate real things, like the fact that I am an Amazon Prime addict, that I have helped Chelsea get through a breakup. These are all things that we incorporated, in little ways, into the show.

WERRRK: Who did the choreography? You were bouncy and in synch!

JACKIE: Chelsea was the choreographer.

CHELSEA: No, no, we both choreographed it… In terms of drag artistry, you get a lot of creative control. So we would book a rehearsal studio and find out what felt good on both of our bodies… When we started rehearsing this, after we had written it and collected all the music, I was like, oh, we have to fucking dance. We got to give you 5, 6, 7, 8. So it was fun to do, and for the audience, they feel like they’re at a party.

JACKIE: We definitely wanted the [music/dance] numbers to carry the story forward, but they should also hopefully make you feel something, if you have any connections to the era that these songs are from. And that’s why we chose a broad swath of music. There’s ’80s, ’90s, and stuff that’s on the radio right now.

WERRRK: How old are your characters, in the show?

JACKIE: We were trying to figure out how we were going to take Romy and Michele, which is a movie that came out in the late 1990s, that portrays their 10-year reunion, which happens in the late ’80s, but we wanted to get back to the ’90s, which was important to us. We’re both ’90s kids. So we decided to actually, and this is a first, age ourselves up a little for the show. Our characters, in theory, would be around 37, 38. And this would be their 20-year high school reunion, which takes us back to the ’90s. We decided that our characters also happen to love ’80s things. They love Cyndi Lauper, they love GLOW: Gorgeous Ladies of Wrestling, which was an ’80s TV wrestling show that has been remade by Netflix… So, you know, I think we’re probably the only two drag queens in the city who would be willing to play older… And it also raises the stakes. In the original movie, the characters, it’s only their 10-year reunion, and they’re only in their 20s. So we thought being in our mid to late 30s would give us a little more motivation, in the plot.

CHELSEA: This show is basically my childhood wet dream, because I was obsessed with Romy and Michele as a kid, so I’m living my truth in this show. Getting to reimagine all of my childhood obsessions is so much.

WERRRK:Talk about working together, in this show and around town.

CHELSEA: I think the driving force behind our dynamic is trust. In something like this, which is scripted, you get that dynamic — but you see it more in our bar shows, because everything is so off the cuff, and that environment is so unpredictable. We’ve been friends for so long, and have worked together so much, there is such a complete trust there. And that often translates into more fearlessness on stage between the two of us, which is I think the best kind of chemistry. Because then, you’re not afraid to do something stupid, look ugly, have your wig fall off. It all elevates the insanity of bar culture and nightlife and drag. It’s so unpredictable, and we really love to play with that in bar shows. Play with the audience, go off script, just get really, really wild.

JACKIE: It’s really the tenant of good group improv, which is, “Yes, and…” That’s something that we both believe in. We certainly take it to the umpteenth level whenever we do anything, but when it’s something that’s a little looser of a format, like a bar show, or when we hosted Drag Brunch in the past, we’re definitely playing with the audience a lot, and building on top of what the other one is doing.

WERRRK: What were your own high school experiences like?

CHELSEA: I had an unusually gay high school experience. I went to a performance arts high school on 48th Street, between Eighth and Ninth Avenue. So I was, like, doing questionable things in the stairwell, and living my best life in high school, and singing and dancing through the hallway, a la Fame. But the struggles of high school, I think, resonate with everyone, regardless of what your specific experience was like, because you experience that at some point or another, in some other capacity. For instance, nightlife in New York City can be really catty, sometimes.

CHELSEA: It can feel like high school. So one of the elements we really wanted to include, which we’re really glad to make happen, was this cameo by Stephanie’s Child (Jan Sport, Lagoona Bloo, and Rosé), who are, like, such good friends of ours, and such nice people, and I’m so glad they were willing to play [mean girls]. But there is that kind of competition and cattiness in our scene, sometimes, so I think that even though I didn’t have a bad high school experience, I’ve come across that. It was fun to explore that, through this particular story.

JACKIE: I had a pretty good high school experience as well. I somehow charmed by way into being Prom King… This was in the early 2000s, when “gay” first started to be kind of okay, and I actually had come out of the closet. I was president of the Gay Straight Alliance… and here’s my little word of advice to any young gay boy reading this article, if they happen to find it: The key to being gay in high school is, make friends with the popular girls, because they will get their popular boyfriends to be cool with you. That’s what I learned. I made friends with all the cheerleaders.

CHELSEA: Or just go to the professional performing arts school in New York City, and you’ll have, like, six boyfriends over four years.

JACKIE: What Chelsea’s trying to say, is, she was a ho.

CHELSEA: I’m not trying to say it, I said it!

WERRRK: What are your other current or upcoming projects?

JACKIE: You can find the two of us subbing for Paige Turner, at Therapy, this month.

CHELSEA: I’m a core cast member of Queen at Industry, on Thursdays… I was talking with Jackie about how we might, whether this happens independently or together as a unit, do new musicals that aren’t straightforward cabarets, in the traditional sense; something that speaks to our real personalities, that doesn’t capitalize on intellectual property.

JACKIE: The next two big things for me, coming up, I’m bringing I Dream of Jackie to LA, then a remount of You Don’t Own Me, with Paige Turner and Sutton Lee Seymour, and Paige is bringing her Easter Egg-Stravaganza to the Green Room in April. The Hell’s Kitchenettes, we’re doing a Disney show, most likely, this summer.

JACKIE: The thing I’d love readers to know, is, everyone is welcome to our show. It’s PG-13, a couple of swear words. It’s a show for people who want to have fun, reconnect with their childhood and their memories, and see two fierce fucking queens living their best lives.

Jackie and Chelsea’s High School Reunion is performed Wed., March 13 and 20, 7pm, at the Laurie Beechman Theatre (407 W. 42nd St., west of Ninth Ave., inside the West Bank Cafe). Tickets are $22 ($35 VIP with reserved seating and meet & greet). To order, visit SpinCycleNYC.com or call 212-352-3101.There is a $20 food/drink minimum. Written and performed by Jackie Cox and Chelsea Piers. Wigs by Bobbie Pinz. Finale costumes by Florence D’Lee. Marketing and promotional photography by Preston Burford. 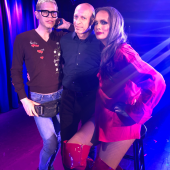