What do you get when you mix together glamour, drama and glitter and drop it all into the YouTube cauldron? You wind up with Jeffree Star and Shane Dawson‘s brand new nine part docu-series The Beautiful Life of Jeffree Star. Now I know I’m a little late to the game, as they have already dropped the first two episodes. But never fear, I will be covering both in this recap, so we’ll be nice and caught up.

Before we dive in, a little recap on who Jeffree and Shane are if you don’t already know. Jeffree Star is the YouTube sensation who has dabbled in everything from pop music, to YouTube tutorials on makeup, and now is the creator and owner of Jeffree Star Cosmetics. To say he has changed the way we buy and experience makeup would be an understatement.

Shane is a YouTube superstar who has risen to fame and maintained an online presence since 2010. His many videos include sketch art, comedy, and yummy food. As of late, he has started to guide his channel into more of a docu-station. Mainly focusing on documentary style mini series that focus on an array of topics.

The Beautiful Life of Jeffree Star basically comes on the heels of their first series together, The Secret Life of Jeffree Star which focused on the beauty industry and its workings. This series is a nine part journey documenting the step by step process of creating and launching an actual palette. This time around, it will be created by Shane with a little help from Jeffree of course.

In the first episode, we follow Shane on a whirlwind trip to Morphe at The Arden Fair Mall in Sacramento, California for the launch of Blue Blood, Jeffree’s latest pallette this past spring. As Shane packs, we learn of his deep fear of flying and the insecurities that have surfaced regarding his recent weight gain. Stepping into the world of beauty can be intimidating as it is an industry so seemingly focused on specific beauty standards, a fact that he discusses with Jeffree on the private jet out to Sacramento. Jeffree reassures Shane that the fans are their to support them not hate, stating “I’m Frankenstein so you’re good…they have seen my mouth sliced open, they’ve seen my  forehead lowered, they’ve seen me at my worst or ugliest , whatever you wanna call it, they just love us for us and I don’t think anyone’s there to judge you at all.”

The rest of the episode basically gives us a behind the scenes view through Shanes eyes, of what an actual launch event it like. And a realization that this goes way beyond beauty. It’s a connecting moment and its personal. Its obvious Jeffree feels its his responsibility to provide the best to his customers. Its not just about being beautiful its about feeling beautiful. Hence the attention to the little details.

The show itself is brilliantly conceived and produced. It truly feels candid and genuine. I’m so excited to see what this new iconic pairing will bring to the beauty and social networking community.

The second episode kicks it up a bit. Segueing from the glam of a product launch to the gritty world that is the business of beauty. With Shane, we pull up to Jeffree’s private studio, nestled amongst gigantic warehouses that could double as studio sets. Before we enter, Jeffree points to a giant warehouse in the distance. “I’ll give you an idea of what I’ve been doing…I just bought that.”….for Shane’s new launch. Shane’s face practically dropped! It seems Star has high expectations for this line.

The majority of this episode really focuses on the steps one must go through when getting a line together. Well maybe not all business as we get to take a tour of Jeffree’s personal arcade, littered with pinball machines and coin ops. Shane appeared to be in heaven and I would have been to! In Shane’s first makeup meeting, they discuss things like the cost of goods, manufacturing and design, but perhaps most importantly, the actual colors in the palette. Oh yes, and the little matter of the gross income! If all goes well, Jeffree predicts Shane could make around the lines of $5 million! Not bad for a first go around I’d say.

Hearing this knocks the wind out of Shane and he decides to take a breather, in a fabulous baby pink bathroom no less. He chokes back tears and manages to express that this is going to be crazy. Its not just makeup, its drama. High drama baby! But his tears turn to laughter as he and Jeffree toil over shade names. Names like “Tanacon” (a sunburnt bright orange like color) and “Jeffree, what the fuck?!

Let us know what you think of this series so far in the comment section and I’ll be back soon with a recap of episode three! 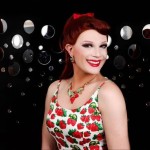 Strawberry Fields is a New York City based drag queen and live singer with an immaculate style that has earned her the moniker “Vintage Vixen”. You’ll find this Glam Award nominated songbird belting out American Songbook standards and Broadway tunes at one of the many amazing NYC bars and clubs, like The Metropolitan Room (where she won “New York’s Next Top Drag Queen” in 2016), New World Stages (where she was a top five finalist for season six of “So You Think You Can Drag?”), Hardware Bar, Duplex and other venues around the Big Apple. If she’s not singing a ditty, you can spot her out and about catching up with the hottest new queens and and the biggest nightlife entertainers that the city that never sleeps has to offer as a part of her always entertaining “Backstage Berry” series!

Never Miss a Story from WERRRK.com!

Hi everyone out there in the WERRRK.com Universe. We hope you’re all safe and stocked during these uncertain times. Much like many of you,...

Our reigning Miss Bio-WERRRK, Monroe Fitzgerald has launched her own YouTube series, “Girl to Queen” and we are very excited to feature  the...

Welcome back to another edition of #THEWEEKINDRAG! Bad news this week for hit YouTube show, Hey Qween. YouTube’s “Restricted Mode” has been under fire...