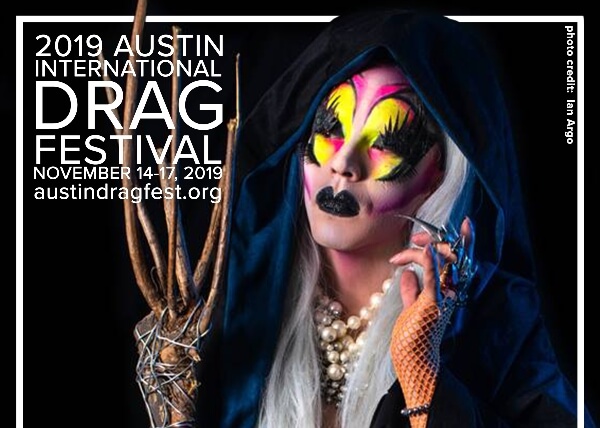 WERRRK.com has proudly partnered up with the Austin International Drag Festival this year and we have been given the privilege of announcing this year’s headliners first! We are so excited about being a part of this amazing event this year and we cannot wait to bring you all the fabulous drag artists that are going to be headlining this year!

We are very excited to announce that Dr. Lady J will be headlining the Austin International Drag Festival this year! (Get your tickets here and join us in Austin this fall!)

Congratulations Doc on being named a headliner! How did you get involved with the Austin International Drag Festival and what does this opportunity mean to you?

Headlining, itself, is a tremendous honor for me! This is a huge opportunity to showcase my best work to the most appreciative drag audience in the world, but also to queens and producers who book shows all over the place. But most importantly it’s a chance to showcase the art that I am proudest of to tons of incredible queer performers who work in, and are as deeply obsessed with, the same artistic medium: drag. The true family I have made in other performers is the icing on the cake and probably the thing I love most though.

For those people living under a rock, can you tell us a little bit about Dr. Lady J and your drag?

As far as looks go, my makeup is inspired by playing too much Laser Quest under black lights in my tween years and wanting to look like the cardboard cutout neon monsters they put up in places like that. My enormous black light sensitive eyes are also a tribute to all of the cartoons from Power Puff Girls to anime whose eyes occupy the majority of their head, as well as my takeoff on the concept behind the Priscilla Queen of the Desert makeup art: emphasize your weirdest feature too much. I have big eyes so I make them tremendously huge and the central focal point of my face. As far as performance goes, I love telling stories on stage, from my costumes to my mixes. I’ve put together numbers that emphasize queer history, told my white trash rags-to-not-so-riches story by working with Nate Puppets to build a creature I could operate from the inside that was made almost entirely out of five years of actual drag costume scraps I saved, and even lopped off my boyfriend’s head in a number that emphasizes heroic women from film and tv who also just so happen to kill their enemies.

We can’t wait to see what you’re planning on bringing to the stage in Austin! Can you give the WERRRK .com universe a little tease of what’s to come this fall in Texas?

As far as this year’s looks and performances go, I’ve been wanting to craft a number based around The Dark Crystal for years and the release of the new Netflix series has given me so much inspiration that hearkens back to my childhood. So I’m pondering a few different ideas based around the Mystics, the Skeksis, and Aughra, all of which would also allow me to indulge in one of my favorite things: Props!