Following on from Janey Jacké’s win and Roem’s elimination in the first episode, you can sense a new pressure in the Werk Room, as the reality of the competition sinks in. ‘Janey has everything a drag queen needs. She is beautiful and also funny’, Sederginne announces in a rare genuine Drag Race compliment without a punchline. Everything is rather congenial at this early stage, but tensions begin to arise throughout the episode.

Drag Race loves a patriotic moment, so it was only a matter of time until clogs found their way into the Werk Room- a shoe has become inseparable from Dutch culture and a national symbol. But these queens could never be seen in such a practical shoe. Instead, they are given the task of customising them and showcasing their new sparkling and feather-adorned clogs. After strutting down the red carpet in their pimped-up clogs, as elegantly as possible in wooden shoes, two winners are announced. ChelseaBoy’s abstract, vibrant design and Envy Peru’s Peruvian-flag-decorated clogs take the win, and they become the leaders of the main challenge teams.

This week’s main challenge is to create a work-out video as a team, with the help of Dutch athlete and presenter Olga Commandeur. On team ChelseaBoy is Janey Jacké, Miss Abby OMG, Ma’MaQueen and Madame Madness. On team Envy Peru is Sederginne, Megan Schoonbrood and Patty Pam-Pam. Of course, these work-out videos are innuendo-ridden, with team ChelseaBoy’s ‘Spice Up Your Sex Life’ vs. Envy Peru’s ‘Gym Club 69’. Team Gym Club 69 hold some of the most amusing moments, with Envy Peru, Megan Schoonbrood and Sederginne particularly selling it.

As the queens begin getting ready for the mainstage, Miss Abby OMG’s corset goes missing, in a particularly stressful moment that raises the question of whether it was hidden as intentional sabotage.

The guest judges this week are singer Roxanne Hazes and renowned makeup artist and YouTube star Nikkie Tutorials. The runway theme is ‘Give Face!’, which requires queens to not only deliver a strong makeup look but also a painted outfit.

Ma’MaQueen creates a chakra-inspired outfit, exploring the idea of ‘your future self embracing you’. Sederginne takes inspiration from Jackson Pollock, with paint splatters and spike details, creating a rainbow punk club-kid look. It feels wrong to say something is unexpected when we’ve only reached episode 2, but it feels like such a departure from the campy Sederginne I have come to expect, and yet works fantastically.

Megan Schoonbrood is a melting ice cream and Madame Madness is Klimt’s ‘Madame in Gold’. Miss Abby OMG wears a Pride-inspired outfit, a ‘crying rainbow’ with her makeup bleeding into her dress. Envy Peru delivers a very well-put-together ‘pop art housewife’, with cartoon style makeup.  Janey Jacké is an alien supermodel, taking inspiration from Avatar with blue body paint set against a structured silver outfit, and she looks great.

Patty Pam-Pam is told that she looks good, but that the judges had forgotten about her by the end of the runway. This is not a harsh criticism of her outfit, but is there much worse than being called forgettable in a drag competition?

Megan receives criticism for her bodysuit, which pulled down the rest of the outfit and Madame Madness is criticised for her dress, which Roxanne says makes her look sad.

As we wait for the final judge deliberation, Janey Jacké expresses that she is not impressed with Miss Abby OMG’s makeup- there is some tension resulting in Abby walking away.

The bottom two are Patty Pam-Pam and Madame Madness and they lip-sync to Katy Perry’s ‘Roar’. It’s a fun, high-energy lip-sync, with both of them managing to do a cartwheel at the same exact moment. This episode we say goodbye to Patty Pam-Pam, ‘Queen of the South’. 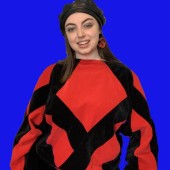