It’s that time again! After the trailer for Drag Race Season 13 leaked online, Christmas came early with the official cast announcement from World of Wonder. So what are we waiting for? Let’s strap in and meet the new crop of queens ready to rule the world.

This Chicago queen is ready to skate her way through Drag Race. The 28 year old performer is originally from Alaska (a first for the franchise) and comes with years of professional ice skating experience. She’s also a third degree black belt, a nature lover, and proud to represent her Chicana/Jewish heritage. This multifaceted queen may just have the diverse skillset it takes to dominate the competition, but with only three years of drag under her belt, is she in for an icy reception from the other contestants?

This blonde bombshell from Vegas is serving grace, face, and she’s ready to race. Elliott With 2Ts is a ballet dancer and showgirl who seems as poised as Drag Race alumni Chad Michaels and Brooklyn Hytes. However, despite her elevated image, Elliott promises in her Meet The Queens video that she’s also “goofy” and ready to have fun. Another comment that stands out from Elliott’s introduction is the fact that she’s not used to spending time around other queens. She confesses “I’ve always kind of been to myself, show up, do my job, go home. It’s going to be interesting trying to interact with so many other big personalities.” We have a feeling with that attitude in a packed work room, there’s going to be some drama in Miss 2Ts’ future.

Don’t get it twisted, it’s Gottmik not GotMilk. The LA-based makeup artist and drag performer is making history as the first AFAB trans-male contestant to compete for the crown. She uses she/her pronouns while in drag and he/him pronouns outside of performing.  “I need to be the first trans winner of RuPaul’s Drag Race. Period.” She proclaims in the opening of her intro video. However, Gottmik’s gender identity is far from the only noteworthy things about her. The former fashion student is already serving up innovative makeup designs, stunning high fashion looks, and a cool, assured personality that’s become a hallmark of someone who goes far on the series!

Joey Jay from Phoenix, Arizona is our favorite kind of talented rulebreaker. She entered the drag scene with no wig and her legal name only to claw her way into the Olympics of drag with her charisma, uniqueness, and…well, you know the rest. “I knew going into the show that not wearing a wig would be a thing,” She says, “if I didn’t, I would be an idiot.” Even though she promises she’s going to switch it up for Mama Ru sometimes, we love that this short-haired diva is staying true to her vision of what drag can be. Now, whether or not Michelle agrees is a different story.

It’s Kahmora with a KAH, not Kimora with KI, cause Kormia with a KI goes KI not KAH. This Chicago-based beauty comes from an impressive drag family. She’s drag sisters with Season 11 winner, Jaida Essence Hall, and alumni Naysha Lopez, and Dida Ritz. The self-described legend says she’s not a pageant girl, because she already knows she’s a winner. And frankly, we love a queen with confidence! Kahmora is already giving us the 3 P’s: polish, presence, and personality!

This Dominican Diva from NYC isn’t coming to play. Kandy is the drag daughter of season 9’s Aja and we can already tell that spilling tea runs in the family. When asked why she’s America’s Next Drag Superstar, Kandy answered with a canid, “Bitch, look at me. I just am.” And she’s no stranger to the spotlight, Kandy already got a taste of viral fame as the queen in the infamous “Alone in the VIP” meme. With a mouth as big as her wig, we’re hoping Kandy Muse brings the comedy, performance, and READS we look forward to every season.

She calls herself “everyone’s favorite homegirl” and we can already see why. LaLa Ri is a Georgia Peach who’s warm personality shines through just seconds into her Meet The Queens video. Even though she admits she has no clue how to work a sewing machine (we’ll see how that turns out), that doesn’t stop her from working the STAGE. Lala promises viewers high energy performances and the wide-eyed excitement of a queen who’s only been in the scene for a few years. She may not have the experience of some of the other girls, but we get the sense it’s not smart to sleep on Lala Ri.

She may be the reigning Miss Paradise, but Olivia Lux is a full-blown theatre queen. As a trained pianist, singer, and actor, this NYC performer is ready to shuffle-ball-change her way through the competition. Even though she comes with an impressive resume of skills, what we were most struck by during Olivia’s Meet The Queens video was her vibrant, playful personality. We’re already looking forward to her confessionals, which are sure to be hilarious. Does she have what it takes to bring the crown back to Broadway? We’ll have to watch and find out.

Just because she’s pretty in pink doesn’t mean this Big Apple queen is pure and innocent. As a member of the drag musical group Stephanie’s Child,  which features Jan from season 12, Rosé got into a televised back and forth with America’s Got Talent judge Simon Cowell. We wonder how much of that sass she’s going to bring to the runway with Mama Ru? In her Meet The Queens video, Rosé describes herself as a perfectionist and confesses that “letting go and having more fun” may be something she struggles with. We’re interested to see if this is the beginning of a powerful story-arc about learning to release some control, or if the pressure of the game will start to make Rosé lose some of her fizz.

This LA queen hit Cali by way of Arkansas and she’s choke full of Southern charm. Rocking a stunning wig design by Gigi Goode, Symone, the “Ebony Enchantress” Symone said she’s most inspired by strong, powerful Black women like the legendary Tina Turner and Diana Ross and we can already see those iconic roots coming out in Symone’s showmanship. She says that even though she may seem shy at first, she’s ready to “prove these bitches wrong.” And something tells us she’s going to live up to that promise.

Nothing can compete with experience! Tamisha Iman is a big name in the national pageant scene as a former Miss Gay America. She also happens to be Lala Ri’s drag mother! Even though there’s no denying that this Atlanta queen is coming into Drag Race as one of the more mature contestants, that doesn’t mean she’s about to coddle these queens with mom energy. “I have a loving spirit,” She says in her intro video, “but if you challenge me in my craft…you will know you made a mistake.” We’re excited to see how this esteemed queen is going to parlay her decades of experience in the battle for the Drag Race crown.

This comedy queen is ready to tell it like it is. The veteran of the thriving NYC drag scene says, “In my drag career I was raised on like, respect and putting in the work. Then you got these new girls coming up doing drag for a day and all of a sudden they’re a star. I’m here to tell them, no baby, sit down.” We’re honestly obsessed with Tina’s boisterous persona and classic camp vibes. She’s already one of the standout personalities of this year’s lineup, calling herself the “driver” of the “crazy” season. In the past, straight shooters like Bianca Del Rio and Evie Oddly have fared well on the show,  and Burner certainly has the stuff to join their ranks.

This small town queen from Minneapolis has big ideas about drag, art, and fashion! Utica is what would happen if Tim Burton and Lisa Frank had a baby who got adopted by Tammie Brown. The “kooky” drag artist is bubbly, whimsical, and deeply inspired by art history. She’s also an insanely talented seamstress, so we can’t wait to see what kind of looks Utica turns on the runway. However, in her introduction video, she already admits her emotions may get the better of her in the high pressure game, “I shut down, get very depressed,” she said, “and cry on the inside but also… the outside.” We can’t help but stan a queen who’s in touch with her feelings and her fierceness! 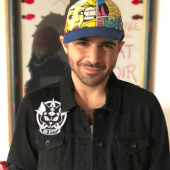