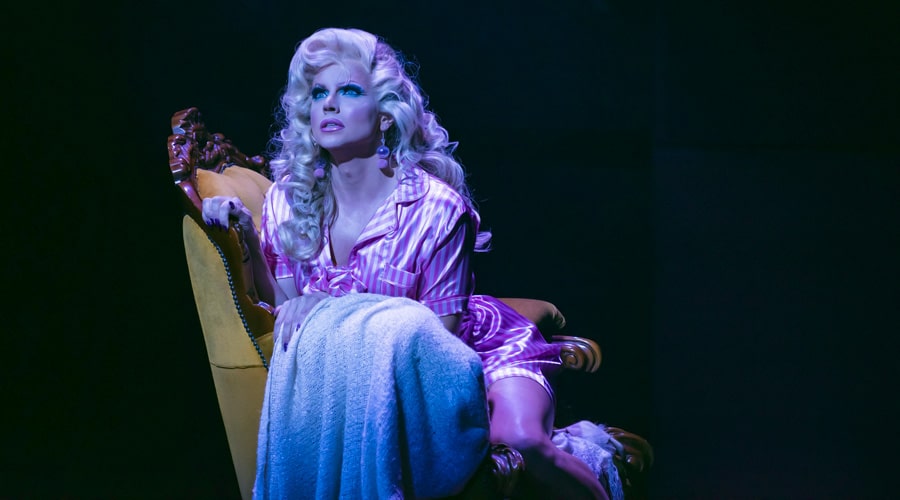 Eight months ago London’s West End was glittering brighter than ever, new talent was being discovered, classic shows were playing to sold out audiences, and the future looked bright. Then on 16th March, the UK government issued a ban on public gatherings to halt the spread of coronavirus, decimating the theatre industry overnight.

Fast forward to the present and theatres across London are beginning to wake up after their prolonged hibernation, playing to socially-distanced audiences, wearing masks and following stringent health protocols, but thrilled to begin creating and sharing art once again.

One particular art form is more present than ever in this reopening – drag! London is about to stage its first ever all-drag comedy at the Garrick Theatre, Death Drop, starring two superstar queens from RuPaul’s Drag Race US – Courtney Act and Monét X Change, as well as a mirage of talented queens from the UK and beyond.

Described as a ‘Dragatha Christie Murder-Mystery’, the show is packed full of goop-worthy gags, scandalous reads, life-saving lip syncs and enough twists and turns to make the Queen of Crime proud.

One of the first musicals to reopen since the pandemic will be Everybody’s Talking About Jamie at the Apollo Theatre. This smash-hit musical has been wowing audiences for over three years in the West End and fans have been clambering for news of its return. Based on the true story of Jamie Campbell who dreamed of becoming a drag queen and wanted to wear a dress to his school prom, the musical is being adapted into a blockbuster film for release in 2021.

Oscar winner Richard E. Grant will be taking on the role of iconic drag queen Loco Channelle, who inspires Jamie (Max Horwood) to follow his dreams. In the West End, TV star Shane Richie will be slipping into the heels from January, alongside newcomer Noah Thomas in the lead role. One of the most beloved stars from Drag Race, Bianca Del Rio has appeared in this musical several times, as well as Michelle Visage and Drag Race UK’s Vinegar Strokes!

Completing the trio of dragtastic shows sashaying into London is Hairspray. This classic musical is being revived at the London Coliseum in what is sure to be an epic production. Michael Ball, who drew huge acclaim and was showered with awards for his performance as reclusive mum Edna Turnblad over ten years ago, is returning to the role in Spring 2021.

Looking further into the future, drag’s sickening hold over London theatre isn’t showing any signs of slowing down – the acclaimed musical adaptation of David Walliams’ children’s book The Boy in the Dress is set to open in London, as well as rumoured Broadway transfers of hit musicals Tootsie and Mrs Doubtfire.

Drag in theatre is hardly a new concept though; in fact, its origins can be traced back to Ancient Greece. Back then, drag was a necessity as the Greeks thought women were unfit for the stage, a notion that was carried all the way through to the patriarchal society of Shakespeare’s times, so young chorus boys and male actors would don dresses and play the female roles.

Drag then exploded during the Victorian era with Vaudeville acts all vying for their moment in the spotlight. Men would dress in outlandish gowns to get noticed, while female comics would dress as males for a better chance of being heard. It’s during this time that the word ‘drag’ gets its name – the dresses the men wore would often drag across the stage, coining the term that’s become so popular today.

This era also gave us the Pantomime dame, a vital component of the beloved British tradition that children and adults alike adore. Usually played by an older, broad male performance, British audiences still pack into their local theatres year-on-year to witness this fabulously camp spectacle.

With RuPaul’s Drag Race bringing the wonderful, multi-faceted world of drag firmly into the mainstream, directors are being more daring as well as new talents challenging gender norms and stereotypes, here’s to the reign of drag in theatre never ending!

Nathan Pearce has lived and breathed theatre for as long as he can remember, from the biggest musicals to experimental shows. As Content Executive at SeatPlan, he is on a mission to help every theatregoer book the best seats at the best value.

While I loved the concept of this week’s episode of RuPaul’s Drag Race, the elimination is one I refuse to accept. It’s getting down...

Last week, RuPaul’s Drag Race took a break from the competition to give us a behind-the-scenes look at shooting a reality competition show during...