This past week, I had the incredible privilege of attending the launch party for Lemonada Media’s BEING Studios – the first audio reality™ podcast studio! The event was held at Creative Artists Agency (CAA) aka the agency that represents almost everyone you’ve ever heard of in Hollywood. Iconic feet have paced these hallowed halls and now this transcendent (pardon the pun) new show has ushered in a new era in podcast possibilities.

The premier was co-hosted by Rupaul’s Drag Race star Kade Gottlieb (aka Gottmik) who blessed us with a new definition for “podcast” and the best soundbite of the night – “It’s literally audio in your ear, bitch!” Donning a zebra print jacket and black and white striped pants, Gottlieb expressed the importance of this podcast in a time where trans people are under attack and anti-trans bills are circling the legislative branches of many states. With this reminder, Gottlieb passed the torch to the gorgeous co-founders of Lemonada Media – Jessica Cordova Kramer and Stephanie Wittels Wachs. Kramer and Wachs found each other after they both lost their brothers to opioid addictions through another podcast and decided to turn pain into art together. After the success of their podcast Last Day (hosted by Wachs), the two pioneers set out to “make a network that makes life suck less.” Thus was the birth of Lemonada Media! 3 years and 23 original series, and one pandemic later, they are launching BEING Studios. Like many of us, Kramer and Wachs found drops of dopamine in reality television during the lockdown. Unlike many of us, their hours of gazing gape-mouthed at a screen inspired an entirely new podcast genre – Audio Reality.

But in order to make this dream a…reality…sorry…Kramer and Wachs required someone who knows how to produce reality television. Enter Kasey Barrett (Keeping Up with the Kardashians, The Real World, Born This Way). Barrett serves as the Executive Producer of BEING Studios and the first unscripted show to launch from the studio BEING Trans.

What if you got to BE someone else? This question and the impact of empathy are the backbone of BEING Studios. Naturally, BEING Trans is the perfect place to start. Allowing for a deeper look into the personal lives of four individuals who identify as transgender – Mariana Marroquin, Chloe Corcoran, Sy Clarke-Chan, and Jeffrey Jay.  BEING Trans is sure to bring a vulnerability and understanding that other media outlets have lacked. The energy in the room as the invited audience listened to 10 minutes of episode excerpts from each member cast was pin-point focus with an air of understanding that we were all honored to be present for this moment. The charm and charisma of the cast radiated from the speakers as they would live from the stage moments later.

The Q&A portion of the night was moderated by Shar Jossell, who also served as the Consulting Producer for BEING Trans! Also on the panel were Kasey Barrett and Co-Executive Producer Sele Leota. The power of the representation int the room was palpable. Mariana Marroquin, who has been active as an anti-violence and trans-rights activist in Los Angeles for many years, remarked on the the shift out of a fear-based lifestyle for trans individuals and community in Los Angeles. Her passion for the importance of cultivating safety and acceptance for the next generation of trans people is audibly illustrated through her big sister/little sister relationship with Chloe Corcoran, who is “relatively new” to her transition. Corcoran shares that she barely recognizes herself from the early days of recording back in September 2021. I, personally, don’t know who she was then, but who she is now is radiant and glowing with deserved confidence!

Comedian and cast member Jeffrey Jay remarked on the importance and difficulty of finding trust with the media. Fortunately, the history of good work produced by Lemonada Media, the hearts behind BEING Studios, and the power of accountability won the trust of the Jay and the cast. The final cast member, Sy Clarke-Chan, who is non-binary, came out and transitioned after marrying their husband and having a baby. Their story highlights conversations around the emotional and physical toll medical transitioning can take.

With four unique perspectives, BEING Trans is sure to hold a lesson for every listener. With the level of vulnerability displayed at the premiere in front of a live audience, I can only imagine what we will experience this season!

After three months of recording five days a week for ten hours a day, about 600 hours of tape was recorded and cut down to six roughly forty-five minute episodes. (WOW!) The first two episodes are out now wherever you listen to your podcasts (Click here to listen)! I highly recommend you do! 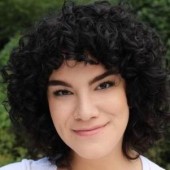 (she/her/they/them) Katelyn grew up as a theatre kid and has written many bios. How dare they be asked to write one more to go with this article. *faints* FADE TO BLACK *thunderous applause with optional standing ovation*