After waiting for what felt like the length of a global pandemic (oh wait, it was), we finally have Peacock’s highly anticipated (by me) Angelyne series starring Emmy Rossum in the titular role. Emphasis on tit. I’ll be doing segmented recaps, because let’s be honest, no one has the attention-span for individual episode recaps, myself included. So l

I have to say, to me, the show seemed to start off a bit flat, much like Angelyne before she got those glorious implants we all know and adore. The series jumps between timelines and somewhat unreliable narrators, including Angelyne herself. While this adds to the wackiness that is the entire story, it does get slightly distracting, as do the prosthetics used to age the actors. Prosthetics— a hard word to spell and an even harder thing for this show to do well, because damn…Pam & Tommy-quality they are not. I still haven’t gotten over how bad they were. This comes from the same network that produces This is Us, a show that’s all about using makeup and wigs to age actors. Maybe the budget for Angelyne pales in comparison. Regardless, everyone looked as ridiculous as the stories they were relaying.

Prosthetics aside, the cast, much like Angelyne, is stacked (I’m sorry), with a bunch of great actors. And Emmy Rossum nearly disappears into Angelyne, nailing her signature high-pitched breathy voice, and throwing in the occasional Marilyn Monroe-inspired “Booooh,” ala “I Wanna Be Loved By You” both to show excitement, and simply just because. While slightly cartoonish, it absolutely works for her.

These first two episodes show how Angelyne rose to fame. Endless tenacity, as well as her unwillingness to compromise led her to become the lead singer of the band Baby Blue, and the eventual famous-for-being-famous billboard queen. What’s incredible is how much she used who she was, both in looks and personality, or more like her persona, to get what she wanted, without ever compromising herself. She was a sex symbol who seemingly never put out. Admittingly, I did empathize with the men who both loved her but also had to put up with her. Which was their choice, but still. When she insisted her bandmates take down the posters they had just spent all night putting up, I was like, “Come on lady!” She was clearly using all them for her own gain, even though they benefitted as well, for instance getting to play the Whiskey a Go Go in the case of Baby Blue.

It was interesting to see how she got her start. I was unaware of her music aspirations before this series, and desperately wish I was around to catch her rolling around on stages up and down the Sunset Strip with Baby Blue. But, these two episodes still leave plenty questions on answered, and Angelyne remains a hot pink enigma, both to the audience and the people in her life at the time.

Keep an eye out for my second recap! Booooh! 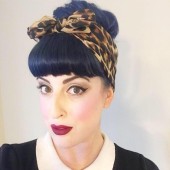