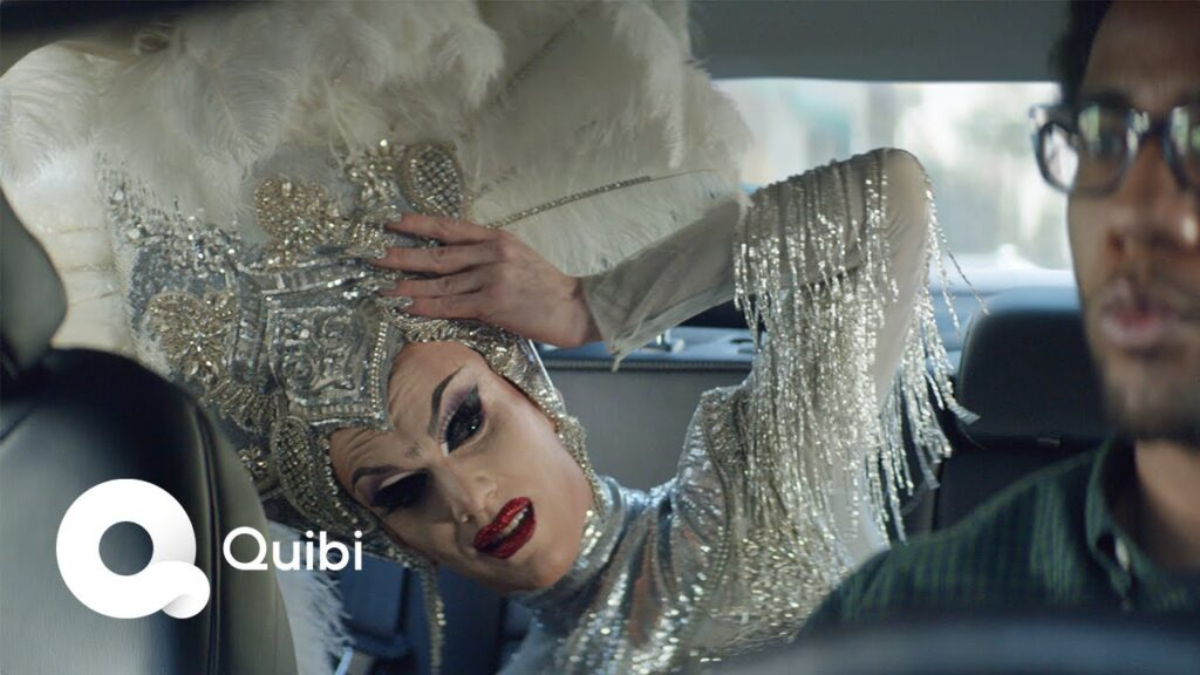 At first I was a little sceptical about the Quibi format- a streaming service designed for mobile phones, with short form content less than 10 minutes long. I’m yet to sample any of the other available programmes, but Sasha Velour’s NightGowns docuseries harnesses every available minute to create something spectacular.

NightGowns provides a fantastic bitesize view into the world of drag. Celebrating drag in an inclusive way is key to Velour’s drag mission and she manages to demonstrate an impressive range of drag styles and gender expressions in her six-person cast. Sasha Velour is an artist that draws on a myriad of influences in her own work, so it is unsurprising that that her shows host such variety.

Drag is an artform that lends itself to the Quibi format surprisingly well. As ensemble drag shows such as NightGowns often see drag artists deliver one short performance, the format doesn’t stage too many limitations. We see one lip-sync performance from each artist and a brief introduction into the personal messages and work-process behind them. In the first episode, Sasha Velour sets out her mission statement: “It doesn’t have to do with disguise, but transformation is important. We’re transforming the system that doesn’t work for us.”

In episode two Sasha Colby gives an emotionally-charged performance of Janet Jackson’s ‘When I Think Of You’, using the character of a popular high-school girl experiencing a breakup to play out her own emotions. Colby touches on the importance of representation in art, describing a life-changing moment of seeing trans drag performers and realising that she could do drag. As a former Miss Continental winner, there is a certain level of perfection and prestige an audience has come to expect of Colby, and she certainly delivers.

A recurring theme through each episode is drag as emotional catharsis, and this is definitely evident in Vander Von Odd’s haunting performance. This horror-inspired artist and The Boulet Brothers’ Dragula-winner often celebrates the beauty of body modification and extreme, otherworldly silhouettes. Behind the dark, gothic performance there is always a heart to it- here quite literally, as Vander staples paper hearts all over their body in a statement about turning pain into positives. Post-performance as the camera takes us back-stage, we see the remains of the staples in bloody marks all over Vander’s face, emphasising their total commitment to the performance.

Neon Calypso is a far cry from Vander- bright both in outfit and performance, delivering an energising and empowering rendition of Patti Labelle’s ‘New Attitude’. Neon shares with us that she uses drag as a way to exercise control over her life: ‘it’s the stories I want to tell, it’s what I want to do versus having other people tell my story.’ Neon is a great reminder that every drag performer has a story to tell- on the surface, Neon’s performance is joyful and entertaining, but holds as much meaning as our more sombre previous performer.

K. James is a drag king whose work focuses on, in his own words, ‘taking iconic images of masculinity and making them very queer within my own trans body. Performing and constructing masculinity in the way I want to see it.’ In this performance, he transforms himself into a vampire for a sexy, decadent burlesque performance of ‘Maneater’ by Daryl Hall & John Oates, complete with glittery blood and jewel-encrusted underwear.

In Episode 7, Untitled Queen takes the stage. Untitled Queen is known for their artistic performances which, as Velour states, traditional drag performers may not even recognise as drag. Untitled Queen describes art as their ‘innate’ language and the way they ‘communicate with the world’. Untitled’s performance begins with the audience completely silent- an achievement for a drag audience- before delivering a boundary-pushing, dynamic performance to Rita Dove’s poem ‘Daystar’.

In the final episode, Sasha Velour closes with a beautiful performance of Nina Simone’s ‘Wild Is the Wind’, with a projection of a growing tree, which Velour’s costume joins up with and she becomes part of. This is a stunning number that I had the joy of seeing live at her recent Smoke & Mirrors tour. In a touching segment we see Sasha Velour revisit the home of her youth, showing us a tree she used to climb up to escape the world.

NightGowns highlights the emotional significance of these performances, both for the drag artist expressing themselves and the audience it is shared with. In a time when we can’t have these experiences in person, this docuseries provides exciting digital drag in an easily-digestible format, with episodes that can be watched on your phone during an ad break or in-between Zoom meetings.

After last week’s episode of RuPaul’s Drag Race All Stars where we watched Mayhem Miller get told she was sashaying away by her best...

Being stuck in quarantine with a lack of live in-person drag shows has made me hankering for some good ol’ fashioned drag documentaries. The...

RuPaul’s DragCon LA 2019: Queens Sound Off on their Favorite Queens!

2019 marked the 5th annual RuPaul’s Drag Con LA, and I had the pleasure of seeing some of my favorite queens, both local and...