False Idylls: Orbiting In To Tiki

7:00 AM. Palm Springs. Early summer and it’s scorching outside already. I’m wide awake, still on east coast time. Light is filtering in through the shades, illuminating the kitschy, faux-nostalgic mid-century modern motel room my friend Jeff and I have booked for the weekend. It’s a place called the Orbit In – yes, with one “n,” and yes you’re supposed to think of atomic age optimism at every turn. Seriously, from the amoeba clock on the wall to the Formica table to the rocketship-shaped ice bucket in the living room, our whole room looks like a Charles Phoenix fever dream come to plastic life. I saunter outside and the rectangular pool is empty; everyone else is still sleeping off their cocktail evenings. The San Jacinto Mountains rise up gloriously in the distance, dwarfing this retro paradise just as it might have done in the actual 1950s, when they were a reality instead of the long-ago dreams of a man who was born decades later. I plunge into the pool and surface gloriously, throwing my head back like Ariel in The Little Mermaid and loving every second of this fantasy I’d stumbled upon.

That’s where so much of the trajectory of my current life starts – that room, that pool, that little patch of Palm Springs. I’ve been drawn to the whole mid-century modern look and feel most of my adult life; the concrete breeze blocks, the Googie architecture, the pastel plastics and shiny chrome. It probably has to do with The Jetsons, because everything comes back to cartoons. When my buddy Jeff and I were planning our Southern California trip, the Orbit In hoved into my vision and everything lit up in glorious Technicolor. Looking at pictures is one thing. Going to Disney’s Hollywood Studios and having lunch at the Fifties Prime Time Café is one thing. Living, breathing, existing in a bubble of this mid-mod theme was something entirely different. This place was idyllic in its theme and its execution, a fiction of a time that existed but also kind of didn’t. A false idyll.

Also, I’m not entirely sure what I was doing wide awake at 7:00 AM. All those people nursing post-old fashioned and martini hangovers? I should have been one of them. One of the main reasons Jeff and I are on this sojourn is to take a tiki tour of the region – tiki bars and restaurants in San Francisco, Palm Springs, and Los Angeles. At this point, I’m very new to tiki. I didn’t really start drinking until I was in my thirties – not for any reason, I just never saw a need. I also didn’t start guzzling coffee until then. Perhaps part of me suspected that mid-life was coming and better prepare for the crisis. The entire tour was Jeff’s idea – though Palm Springs and the Orbit In was mine – and while the only tiki I’m really familiar with is the Enchanted Tiki Room at Disney parks and the Trader Sam’s on both coasts, I’m fully game. Jeff and I met at a Disney fan function and have been friends ever since, and he knows the sort of themed entertainment that makes me giddy. Tiki, as it turns out, makes me giddy.

I had been in San Francisco for work, but when the night came, we would start to hit bars. As I said, I started off my adulthood teetotalling, so the very concept of a bar crawl was novel and a little scary to me. I hadn’t been in a bar regularly since my husband and I stopped going to the Ramrod in Boston once domesticity swaddled us in its clinging, soft embrace. What I didn’t know then was that San Francisco was one of the loci of both the original tiki explosion in post-Prohibition California, and the tiki resurgence that started taking hold in the late 1990s. I was just going because it seemed like a neat experience, another aspect of that mid-century modern thing I was so all about. I didn’t know it was going to be an inflection point.

In San Francisco, we visited Smuggler’s Cove, a three-story tiki paradise with two bars and exceptional theming. Everything felt like it was underwater. The walls and ceiling were festooned with nautical bric-a-brac. A small fountain lit from within burbled under a staircase on the lower level, glowing blue and adding to the ethereal feel of the murk of the place. The drink menu sprawled out before me, with names like Aku Aku and Three Dots and a Dash and Doctor Funk. All of it was strange, the first new drink language I would have to learn since discovering that Starbucks was using fake Italian for beverage sizes, a concept that charmed me so much I learned to like coffee.

We drank at Smuggler’s Cove, and a jungle-themed bar called Last Rites that purported to be the ruins of a downed commercial airplane in a remote jungle island. The place smelled of burned cinnamon and adventure. The seats were 1950s airplane seats. Giant skulls glowed from the dark walls. It was feeling more and more like a new world was opening up to me, a world removed from the Disney fantasies I’d always loved … but not that removed. The Tiki Room, the entire concept of Adventureland, the Jungle Cruise – those were influenced by places like these in the 1930s and 40s and 50s, and here we are, full circle, with revival bars and restaurants influenced by Disney’s concepts.

We headed to the Tonga Room, legendary establishment in the basement of the Fairmont Hotel; a boat in the middle of the lagoon that dominates the room hosts musicians, and every once in a little while, thunder rumbles and lightning flashes and there’s a rain shower inside. How did this happen at places outside Disney? What magic had gripped these bars that made them so astounding? My world travel so far had supported my Disney habit. Yes, Jeff and I went to Tokyo to see Tokyo … but we also spent a lot of time at Tokyo Disneyland. Ditto Paris, ditto Hong Kong. This was something entirely different. This was going to a regular, normal city and finding a lushly themed environment hidden away, ready to make your dreams of adventure come true.

So here we are, back in Palm Springs. 7:00 AM. The night before had been a crawl for Jeff and I. First, a trip to the Tonga Hut (nice, but I didn’t know about the hidden room, and we drank out on the balcony instead of in the themed inside, and there was karaoke happening. Which should have been a strict no-no for me because what disrupts your tropical escapism more than some jerk crushing “All These Things That I’ve Done” by The Killers? Except the jerk seriously crushing it was me, because I love karaoke, and I’m a singing, drinking hypocrite. I got soul but I’m not a soldier, and so forth.) Then, The Reef at Caliente Tropics, a semi-seedy tiki-themed hotel with one of the more classic tiki bars on the west coast. They were silently playing episodes of Magnum, P.I. on the TV and playing yacht rock overhead and while it wasn’t the tiki sounds of classic exotica or more modern surf rock or hulabilly, I was very into the smooth sounds of Christopher Cross and Michael McDonald. And the bar was lit up gorgeously and also so was the bartender, with his dark beard and his kind eyes and the way he told us about Bootlegger Tiki, just up the road a piece.

Ah, the Bootlegger Tiki. I think it was Jeff’s favorite. Dark inside, swathed in red like we were in the glow of a volcano. Gorgeously low-brow black-velvet paintings of half-nude wahines hung on the walls, while Jeff and I hung at the bar, sipping drinks with complicated, thrilling garnishes, like tropical hideaways in a ceramic tiki mug. Was this my fifth drink of the night? Sixth? I was mellow and I couldn’t feel my legs and the next thing I remember, we were in an Uber and I was telling the driver he had to find a 7-11 because I needed Twinkies. Not twinks, this isn’t that sort of column. Twinkies. Badly.

So he stopped and Jeff went in and got us Twinkies and by the time we get back to the Orbit In, it’s late, I’m drunker than I’ve ever been, and I devour three or four Twinkies because they are the best things ever in this whole wretched world.
And my dangerous ability to elide hangovers is in full force this astounding morning, my last in Palm Springs. We have left our themed room to travel to three themed bars and now I am having a themed morning, where the natural world of the San Jacintos is only part of my constructed environment. Up ahead is Los Angeles, where awaits another mid-century modern hotel, and a whole different themed experience. But that’s a journey for next time. I promise you: it’s magic. 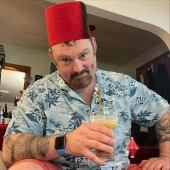 Kevin Quigley is a novelist, graphic designer, and podcaster living in Boston with his husband, Shawn. His first taste of themed entertainment was the Chuck E. Cheese’s in upstate New York he would drag his grandparents to every summer for his birthday. Since, he has immersed himself in environments as diverse as Disney parks, tiki bars, and The Rocky Horror Picture Show live, forever at the crux of kitsch, camp, and radical sincerity. He’s a fan of mid-century modern design, aloha shirts, and the homoerotic subtext of the music of Bruce Springsteen. 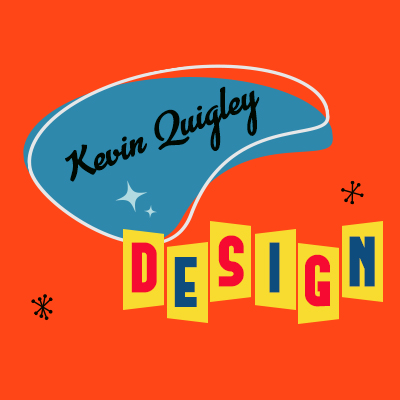