What The Walking Dead: Start to Finish 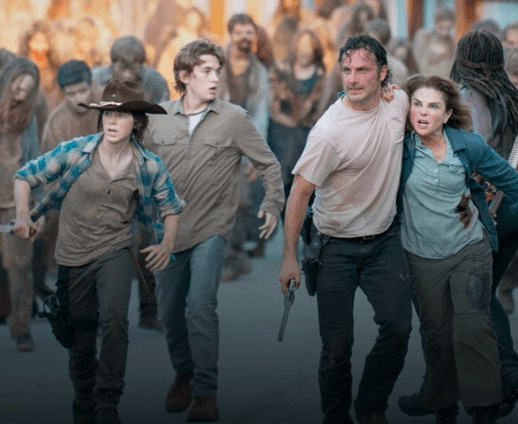 Hello everyone! Welcome to the recap of the Mid-Season finale of the first Insidious movie… eh wait The Walking Dead. Sorry I was really confused by the opening to the show since it used the Insidious soundtrack. This episode was very stressful and I am still using my inhaler every fifteen minutes. But I will survive. So this episode the Walkers get in the walls of Alexandria. Instantly our group kind of splits up into different houses to hide.

Rick’s group was made up of Carl, Michonne, Deanna, Judith, Father Gabriel, and the Anderson family. We come to find out Deanna was bit which was really sad, but it was beautiful because she was still so hopeful and full of great insight. At some point, Ron tricks Carl into coming into the garage and tries to shoot him. Carl fights off Ron but because of the destruction in the room, the Walkers start coming in the house. The group has to keep fleeing upstairs. Eventually Rick decides to use the “cover yourself in guts trick” to get everyone out. Deanna decides to stay back and has a really heroic death.

Maggie barely escapes the Walkers and climbs onto a scaffolding. Glenn can see Maggie from a distance which is a small moment of happiness.

Morgan and Carol are together after Carol gets hurt. But when he least expects it, Carol gets by him to see the Wolf that Morgan has held captive. Carol tries to kill him but Morgan gets in the way. They get in a fight which ends with Morgan knocking Carol on her back. Instantly Morgan gets knocked down by the Wolf he was trying to protect. The Wolf ends up walking out with Dr. Denise by holding a gun up to her. Tara, Rosita and Eugene have to let her go by putting their guns down.

I mean what can I really talk about? There was nothing fabulous about this episode. It was just plain stressful from beginning to end. It  was nice seeing the priest show a little bit of hope for once and a decent attitude. Glenn saw Maggie from a distance so at least we know Glenn gets to smile once before something terrible happens. Deanna’s final moments with Michonne made me tear up. But we will talk about Deanna later. The most important positive thing I can say is that Carol survived this episode. It was a very close call but as of now, Carol is still fighting…

Where do we begin? First of all I just want to say how DONE I am with Morgan! Really, you are going to protect this creepy Wolf dude alive and actually use yourself to stand between the Wolf and Carol? Please get a grip Morgan. I want you around Morgan because I like you. But actually I would not have cared if Carol killed you so that is bad news for your street cred. The whole Ron and Carl situation is making me mad. I was hoping Carl would have just shot Ron deaf after what he did but he didn’t even tell his dad. Creepy Sam needs to stop listening to creepy vinyl records from Urban Outfitters or I am going to be mad.

As you may know, usually I give out a MVP award but unfortunately we have to say goodbye to a dear friend of ours who really is the episode MVP anyways, which makes her the holder of 2 MVP’s. Deanna did not die sad or defeated after everything she worked hard for is destroyed. Deanna died a hero. She always had a dream. But what is even more amazing is Deanna did not just dream for a better future for herself, but for a better future for all of those she brought into Alexandria. Deanna’s courage is inspiring both to those around her in the show but it should also be taken into our lives as an audience. Even when the world is ending, always try to find the positive note in life because it is already hard enough.

Well that is it for the first half of Season 6 of The Walking Dead. The show is scheduled to come back February 14th, 2016. I will be back then to talk you all through the madness of this show. But, I am turning 21 the day before so expect a really hungover ramble about Carol. I don’t how the group is going to get out to survive, but at least the Red Priestess just arrived to the Wall so at at least they can be resurrected… Oh wait, that is Game of Thrones….Until then, stay safe and don’t be afraid of the dark.

In this article:AMC, recaps, spencer, spencer williams, televison, The Walking Dead, what the walking dead